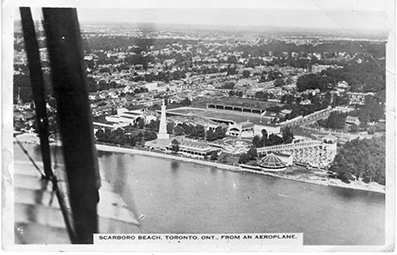 An aerial view of Scarboro Beach Amusement Park from an historic postcard.

Whatever happened to the businesses on Queen Street East? Dear readers, I want your input and your memories on this crucial subject.

First, let us get a little bit of history on Queen Street since this month is Toronto’s birthday.

Queen Street, in one way or another, locally and politically has been a part of the city practically right from the start.

Why did people from other parts of Toronto want to come to Queen Street East and the Beach?

People came by steam ship and streetcars to the area for these amusement parks.

The race track eventually moved to the new Woodbine location in northwest Etobicoke, but gambling still exists in the Beach.

What has religion to do with Queen Street East you might ask. Well, dear readers, all those gamblers have to pray for their sins etc…

There have been, and are, many places of worship on Queen Street. Many of these religious groups held picnics over the past 100 years in the different parks in the area.

We had an open-air church on Spruce Hill Road that later made a permanent home with St. Aidan’s at Queen Street and Silver Birch Avenue.

We have the Beach Hebrew Institute Beach Synagogue, and Corpus Christi Catholic Church.

All of these places of worship, from the 1880s to the present time, are located on or near Queen Street East.

Queen was also the main avenue for education with Kew Beach school for 130 years or so. There’s also St. Denis Catholic School, Montessori schools and other too many to mention. They all make a common thread for people in the area and create business along Queen Street East.

We also have the Kew Beach Tennis Club. Did you know that there were once also tennis courts in the Queen Street East area that were near St. Aidan’s, and also near the Beaches Branch library.

We had miniature golf on Queen Street at Eastern Avenue, and also near Maclean Avenue.

We hosted tryouts for Olympic Games at what is now Pantry Park, and many an Olympian has trained here.
I could go on and on about sports.

This is what has brought tourists, visitors and eventually residents to the area both then and now. People would come here and then they settled on the side streets and opened businesses on Queen.

Transit was and still is an important part of making a main street like Queen viable.

Transit has been serving the area for about 140 years, bringing in millions of people to work and play.
Wars have also shaped the Queen Street East community. There is a veteran’s memorial in Kew Gardens in honour of those brave Beachers who gave their lives to serve their country.

The memorial is an important part of what makes Queen Street East and its parks special.

We have the finest parks in the city exemplified by Kew Gardens on Queen Street. Its lush green grass and blooming flowers are the envy of all Toronto.

Also, all of the streets going south from Queen down to our famous Boardwalk are the best by far in the city, especially when you toss in the sand, the water and the wind.

And this brings me to our topic, the Beach’s business people.

What about them? These are the questions I would like you to tell me and Beach Metro News about.
What do you remember then and now?

Over the past 135 years or so, there have been thousands of businesses along Queen Street East. Some have stayed and some have gone.

For instance, Queen Street East once used to have quite a few gas stations from Coxwell to Victoria Park avenues.

Do you recall the one at Woodbine and Queen? What about the one on the south side of Queen past Leuty Avenue?

There are still a few auto shops around, but only one or two on Queen.

What about drug stores? At one time there were a couple of dozen of them. Do you remember Dunc Meyers IDA drug store?

There were drug stores at Queen and Lee (in 1906), at Beech and Queen, and Coxwell and Queen. Even today there are many drug stores that have come and gone.

What about restaurants and cafes like the Nevada, The Goof, Mr. Karas and the Mecca Restaurant, home of Alex Christie.

Do you have memories of these places?

I can’t even begin to write about places like Woolworth’s, the bakeries and the different butcher shops and the candy stores. It’s up to you to let us know what you remember about them.

When you talk about what made Queen Street special, you have to remember we had motion picture houses like The Beach, The Fanule, and The Melba. And how can we ever not mention the Fox Theatre – still going strong after 107 years.

The people and businesses are what make Queen Street East what it is. Ryan’s Hardware was there for more than 80 years.

We had stereo shops, camera shops, radio stores, and women’s clothing stores. Remember Seaway Meat Market, Lick’s Home Burgers and so many more. There were, and are, also great gift shops like Seagull still going strong.

What about our banks, the financial backbone of the Beach and Queen Street East?

We have TD, Scotiabank, BMO, RBC and CIBC and other financial institutions in the area. For more than 100 years, the banks have been a part of the community.

We also used to have a couple of bowling alleys and a pool hall. Where were they, dear Beachers?

Also, when it came to alcoholic drinks Queen Street East was once as dry as a desert. We had Puritan Sundays with no stores open and no shopping. All that has now changed.

Did you know that Queen Street East in the Beach was once voted as the Best Main Street in Ontario and won an award from TVO in 2002?

I am asking you, dear readers, what has happened to Queen Street East?

I will be writing more on this in the future, so stay tuned.

EDITOR’S NOTE: If you have memories of Queen Street East in the Beach that you would like to share with Gene Domagala, you can send them to us by email to alan@beachmetro.com or to Beach Metro News, 2196 Gerrard St. E., Toronto, ON, M4E 2C7. We will make sure they are forwarded on to Gene.