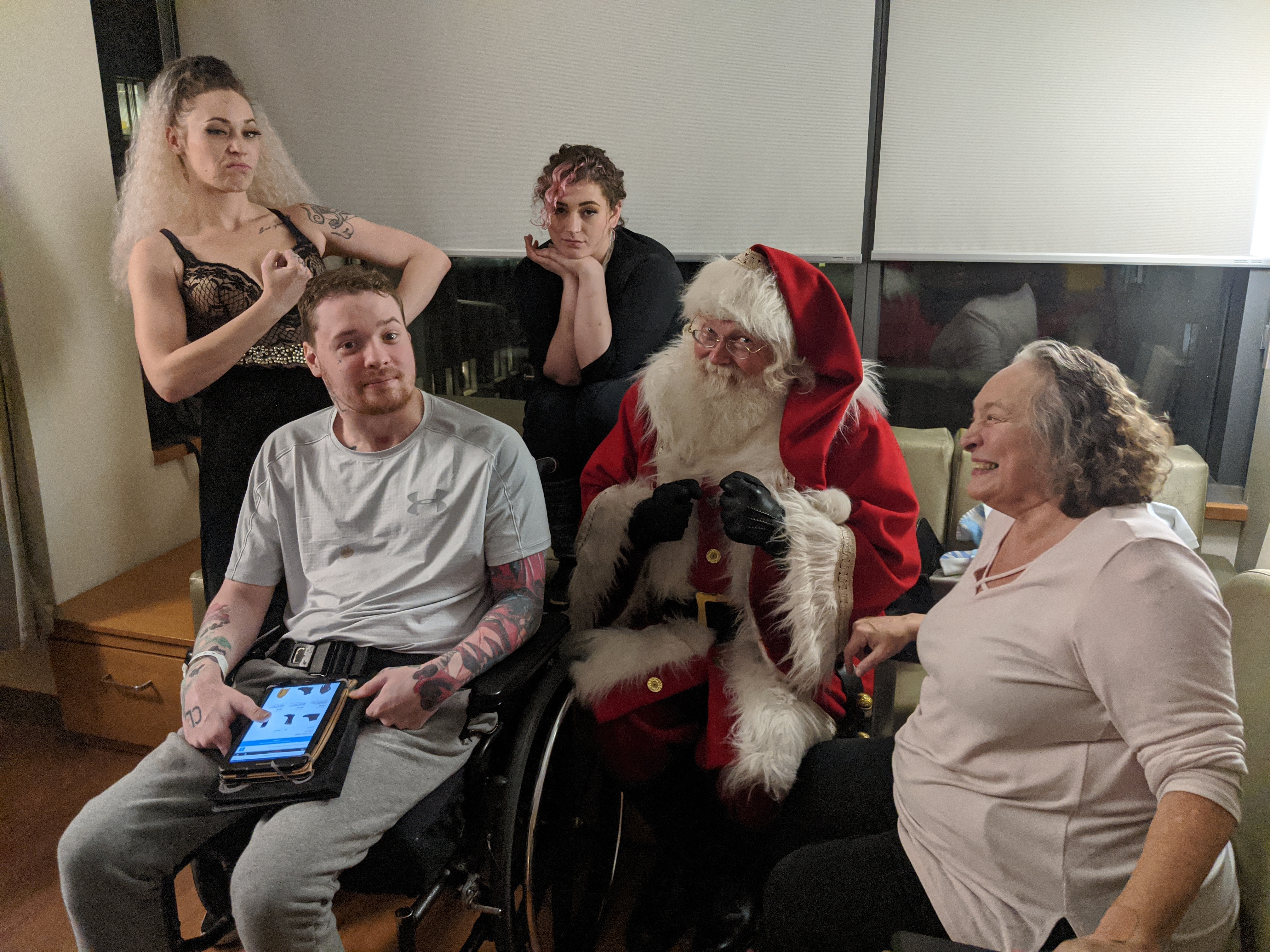 Santa Claus (Paul Dick from the Beach who used to teach Patrick Kunkel music) took time to pay a Christmas visit to Patrick at the Toronto Rehabilitation Institute. From left to right are Patrick, Paul Dick, and Valika. In the back row are Patrick's sisters Kayla and Colleen. Photo: Submitted.

In July of last year, East Toronto area resident Patrick Kunkel suffered a massive stroke that affected his cerebellum. Despite the odds, he woke from a coma and was responsive after undergoing life-saving brain surgery.

“They didn’t think he would come out of a vegetative state,” Valika, his mother, said of the stroke which took place on July 3, 2019.

“For a while there they called him a ‘miracle baby’ because no one, the doctors and nurses up there, didn’t expect to get any response out of him and he was responding every day or every week and accomplishing something new,” she said in a recent interview with Beach Metro News.

After spending about four months at St. Michael’s Hospital, Patrick, who is 28, was moved to the Toronto Rehabilitation Institute for what was supposed to be an eight-week program.

Patrick has been making steady progress since then and is breathing on his own, eating on his own and has even started learning how to walk and talk again.

When the eight-week program at Toronto Rehab was finished on Feb. 20, Patrick’s family struggled, as they didn’t have a place for him to live. Toronto Rehab granted them more time until they found transitional housing, which is temporary as Patrick is expected to move out of the unit on April 20 of this year.

At the transitional housing, he receives some physiotherapy and care but not as much as he had previously. He recently began his walking treatment but was put on hold because of the COVID19 restrictions, which is also having a severe impact on his family’s ability to find Patrick a suitable place to live.

“He’s still in a wheelchair and everyone in the family has a place, we rent a place but all of our apartments have stairs unfortunately,” Valika said.

According to Valika, Patrick’s situation for constant care is temporary and can change between two to five years from now.

“None of us wants to give up the apartments we have in the city because it’s affordable for us,” Valika said.

Even after applying to the Toronto Housing program, it is still a 10-year wait, she said.

Valika and Patrick’s sister, Kayla, did happen to find an accessible unit but it is priced at $1,700 a month, and Patrick will be receiving $1,200 a month from the government.

Kayla has put her life on hold, working only weekends, to take care of Patrick during the week. Valika is retired and living on a fixed income, which makes it difficult for them both to not only pay the remaining $500 a month for rent  but also for food and other supplies. They are still looking for suitable units for Patrick.

Through this hard time, Valika said that the support they received from the community has been amazing.

She used to work at St. Denis Catholic School on Balsam Avenue in the Beach, and for this past Christmas the staff had arranged a dinner for the Kunkel’s at the Toronto Rehabilitation Institute.

Patrick’s friends also created a GoFundMe page and the money accumulated went to pay the remainder of his rent at his old apartment, movers to get his furniture out and a storage unit to place it all, said Valika.

The Kunkel family is seeking help in finding an accessible and affordable unit for Patrick, and are hoping the community can be of assistance in this difficult and stressful time.

If anyone has any leads or information on a suitable unit for Patrick, please call Valika at 416-464-8784.