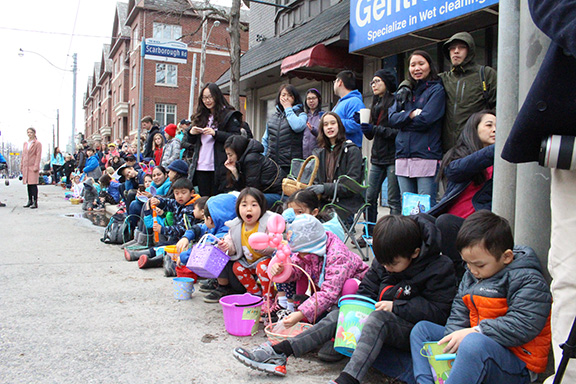 Crowds of children and their parents attended last year's Beaches Easter Parade on Queen Street East. This year's parade has been cancelled due to the COVID-19 crisis. Photo: Beach Metro News file.

The annual Toronto Beaches Lions Club Easter Parade and the celebrations around it including an Egg Hunt for children in Kew Gardens on Good Friday has been officially cancelled for this year due to COVID-19 virus concerns.

“At the direction of Toronto Public Health, Public Health Agency of Canada and local officials in response to COVID-19 concerns, we have made the difficult decision to cancel this year’s Beaches Easter Weekend celebration scheduled for April 10 – 12, 2020,” said a statement issued just before noon on Tuesday, March 24.

“The safety and well being of our attendees, volunteers, staff and community remain our top priority and as such, we are choosing to do our part to flatten the COVID-19 curve. We urge everyone to follow the guidelines and protocols put forth by public health officials,” said the statement.

“Thank you for your continued support and we look forward to next year’s Annual Beaches Easter Weekend Celebration, April 2 – 4, 2021.”

Along with the parade itself on Easter Sunday (April 12) which would have run along Queen Street East in the Beach and regularly draws hundreds of participants and thousands of spectators, other events planned for the Easter Weekend in the Beach included a Good Friday Egg Hunt for children at Kew Gardens.

The Easter Parade has been taking place in the Beach since 1967.

It was originally routed along the Boardwalk for its first seven years. The Beaches Lions Club became actively involved in 1973, and the next year the parade moved to Queen Street East. By 1981, the Lions had become the parade’s official organizer.