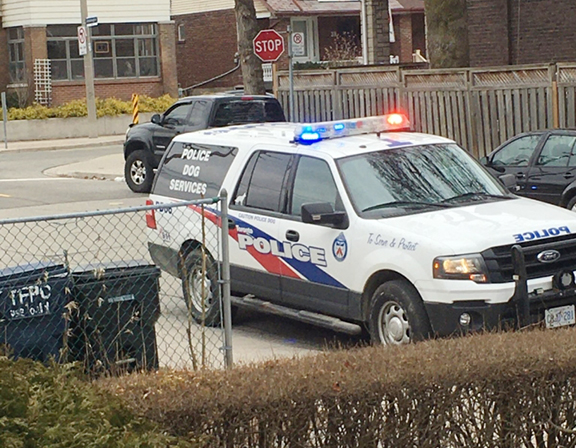 The Toronto police canine unit was called to the Eastwood and Gainsborough roads area early this afternoon (Thursday, March 26) as officers searched for a suspect in connection with an armed robbery in Leslieville. Two men have been arrested in connection with the incident. Photo: Kathy Ireland.

Two men have been arrested in connection with an armed robbery at a financial institution in Leslieville early on the afternoon of Thursday, March 26.

Police were called to the intersection of Carlaw Avenue and Queen Street East just before 1 p.m. for the reported robbery of a financial institution. Two men armed with handguns had robbed the institution and fled the area.

Police were able to quickly apprehend one of the suspects as he headed east from the scene.

A second suspect was arrested in the Eastwood and Gainsborough roads area shortly afterwards.

Police had flooded the area with a number of officers and units and including the canine unit.

No one was injured in the incident.