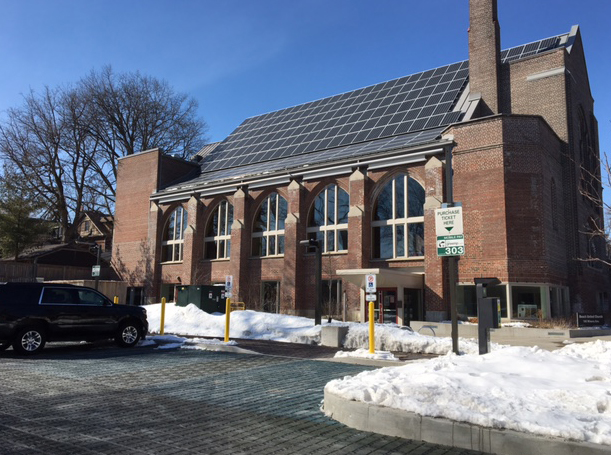 This is the third of a series of articles on Green Groups in the East End that I began writing earlier this year.

There is a growing understanding by local residents that minimizing the potentially dire effects of Climate Change will require action on all fronts. Many have been frustrated by the avoidance of serious commitment and action from our governments .

Hand in hand with this frustration is a growing sense of anxiety and a need for urgency.

As a way to magnify voices, to have a greater effect on elected officials, to increase common support and to build awareness of the need to act on Climate Change many residents are joining together into local groups.

Beach United Church (BUC) has been on my green radar for many years – it’s green rebuild and retrofit has been a great example to the community of smart action in a climate crisis world.

The church has also been involved in reaching out by sponsoring events such as election debates and presentations.

For example, last June the BUC joined with other local groups and hosted The Road to a Green New Deal Town Hall. More than 150 attendees from the area came out to hear about the Green New Deal and to come up with a list of climate action community based ideas, initiatives and projects.

At that event ,a number of residents signed up to work on various projects.

One of the Beach United Church’s missions is “seeking Climate Justice for the Earth and its People”.

To help support this aim a new group was created last year – The Environmental Action Group (EAG) at the Beach United Church. Their chair is Paul Dowling. Membership is a mixture of the congregation and interested residents.  They also welcome new members and affiliations.

Ron Fitton, the spokesperson for the group, mentioned that they are interested in what other green groups are doing and is encouraging outreach to these groups. He also highlighted that there is an informal network of church groups in the area such as St Aidan’s and the Unitarian Congregation, and they often support each other in events.

Fittton had been planning to inviting area residents to Drive Green electrical vehicle presenation at the church in April, but that event has been cancelled due to the COVID-19 crisis.

On my expeditions in the East End I am seeing more and more round green decals in store and restaurant windows! These green ringed decals say “Bring Your Own” along the top, BYO in the middle and along the bottom, depending on the neigjhbourhood, Kingston Road Reduces, Beaches Reduces, Leslieville Reduces or Danforth Reduces.

What are they? They are part of a volunteer-based campaign aimed at reducing the use of single use plastics by encouraging consumers to BYO containers and local businesses to accept them and to carry reusable items

Started last year in Roncesvalles by Tina Soldevieri, the first campaign – Roncy Reduces – was a huge success and has acted as a template and inspiration for 18 other groups across the city.

In the East end here  are the four groups ( and contacts ) taking this on – Kingston Road Village (Teresa Miller) , Beaches (Adrianna Couto),  Leslieville (Lindula) and the Danforth (Katrina McGuire)

I spoke to Teresa Miller about this campaign and why she is taking part. To her it is important because it “starts a conversation that wouldn’t happen otherwise” and accelerates change. She adds “if we are not seeing change from higher levels then we need to make changes in places we can control” .

Teresa has spent hours approaching businesses to encourage them to join this campaign She helps them through idea generation, suggestions and solutions.

If they are in agreement a sticker is placed in their window and their support is highlighted in social media channels. This is a great opportunity for businesses to promote their green works and good timing as many governments are starting to ban single use plastics.

The four groups have had excellent participation : 15 along Kingston Road, 27 in the Beach, 25 along the Danforth and 9 in Leslieville (which launched in February.)

All four Reduces groups are looking for volunteers – to contact them – just use the name plus gmail  eg. Kingstonroadreduces@gmail.com

A local event that is a highlight on the local environmental calendar has had to be cancelled due to the COVID-19 criss.

Th  Scarborough Seedy Saturday and Green Fair was set to take place on Saturday, March 28 but has been cancelled.

More information on the group can be found at https://www.facebook.com/SSSGFair/

I am interested in finding out about the various East End community green groups, green projects and events.

If you would like your group covered in the Beach Metro  News by me, then please contact me at k_fullerton@sympatico.ca