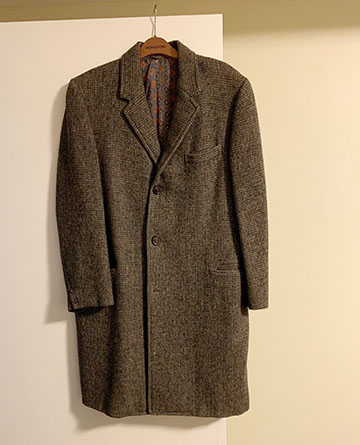 This overcoat was purchased from Mealing’s tailors on Queen Street East.

Re: Memories on the history of Queen Street East sought, Beach Memories, March 17.

Soon after we married in the late 1960s, we decided to invest in a good suit for my husband as I was not happy with the cheap ill-fitting off-the-rack outfit from Kingston Road that he wore to our wedding.

It would be an investment for the future as every man should have at least one good suit, I thought. We bought it before we even had the deposit for a house.

We decided to go the bespoke route, i.e. custom made. We took our business to Mealing’s, the tailors on the north side of Queen Street between Balsam and McLean.

It was a quiet dignified place with dark wood panelling, polished wooden floors, an antique oval chevalier mirror, and fitting rooms in the back.

The shelves were neatly stacked with rolls of conservative wool suiting and more colourful linings. The staff, all slim, elegantly-dressed men, had cloth tape measures draped around their necks, and a pin cushion and note pad close at hand.

A couple of dummies displayed the thoroughness of tailor’s art with jackets under construction turned inside out with several layers of cloth and interfacing basted together.

We chose a dark brown wool for the suit and a grey tweed for the overcoat. The lining of the overcoat was royal blue with a discreet red paisley pattern. On the inside pocket of each coat was an embroidered label with both the names of Mealing’s and my husband. We made several visits to Mealing’s for fittings, then finally the clothes were ready.

My husband wore them any time he needed to dress to impress until his death 30 years later. I passed them on to the Salvation Army. Mealing’s closed long ago, and the suit and overcoat became a distant memory.

About 10 years ago a friend‘s son bought an overcoat at a sale of theatrical clothing that was no longer needed on stage but was still in good condition. He purchased the grey tweed overcoat with my husband and Mealings’ names sewn into the lining.

If that overcoat could speak, I wonder what stories it could tell.