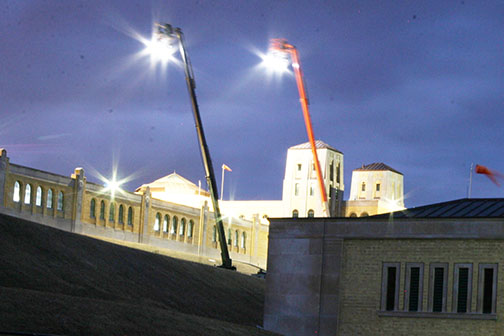 The R. C. Harris Water Filtration Plant on Queen Street East was lit up on the night of Feb. 18 for filming of the Guillermo del Toro movie Nightmare Alley. It’s a memory that seems lost in the reality of how we are now living while dealing with the COVID-19 pandemic, writes Reel Beach columnist Bernie Fletcher. Photo by Bernie Fletcher.

“Harris had dreamed the marble walls, the copper-banded roofs. He pulled down Victoria Park Forest and the essential temple swept up in its place, built on the slope towards the lake. The architect Pomphrey modelled its entrance on a Byzantine city gate, and the inside of the building would be an image of the ideal city.”

In the Skin of a Lion, by Michael Ondaatje

Now that seems like a distant memory lost in the fog of a viral pandemic and we’re all stuck in an endless disaster movie where reality is scarier than fiction.

On Feb. 18 the bright lights of the movie cranes lit up the night sky and reminded me of the alien machines shooting out deadly rays in The War of the Worlds, the 1953 film that scared the heck out of me as a little kid.

Today we are fighting an invasion by an invisible foe.

If the past months have taught us anything, it is how important public health is.

Sometimes it takes a tragedy to wake us up. We are not above nature. We’re a part of our natural environment.

Back in 1906 Roland Caldwell Harris (1875-1945) was Commissioner of Property for the city and living with his family in an apartment at Toronto City Hall when his six-month-old son Emerson died from a bacterial infection.

Harris knew Toronto had to build for the future.

He could look across Terauley Street (now Bay Street) and see the appalling sanitary conditions in “the Ward”, home to the city’s poorest immigrants.

His vision was safe, clean drinking water for everyone.

At the time Ashbridge’s Bay was a swampy, open sewer. The infant mortality rate from diseases like typhoid, diphtheria and tuberculosis was very high.

A great city needs infrastructure. After becoming Commissioner of Works in 1912, Harris set out to build the Prince Edward (Bloor) Viaduct across the Don Valley and the beautiful Art Deco Waterworks by the lake.

In 1909 the Harris family moved to Balsam Avenue in the Beach and then in 1918 to Neville Park Boulevard where R.C. could be close to his dream project.

The plan for what was then called the Victoria Park Filtration Plant was conceived in 1913, but stalled for years.
Work on the plant started in 1932 and it finally opened in 1941.

Michael Ondaatje’s novel In the Skin of a Lion envisions the hardships of immigrant workers on the Viaduct and “the Palace of Purification”.

R.C. Harris was still Commissioner in 1945 when he died at his beautiful home on Neville Park Boulevard.

His achievements are a reminder that we need to invest in a city.

Three cheers for all the real superhero public health workers on the frontlines out there right now.

“A city is something into which men put their souls.”