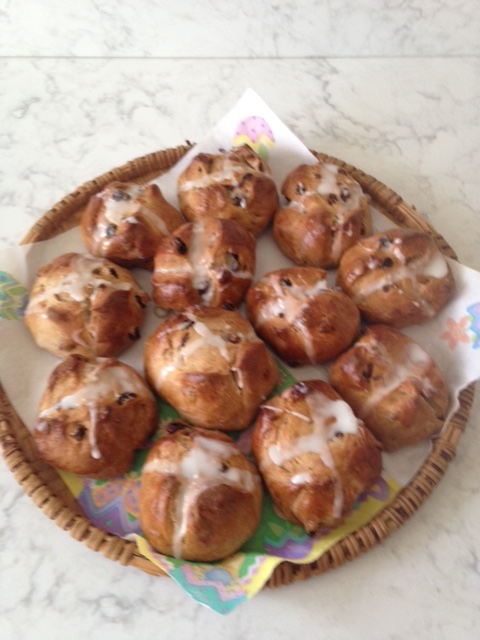 A good recipe takes off.

My friends Nora and Lynn both received the Hot Cross Bun recipe that appeared in the March 31 edition of Beach Metro News and on the website on March 28.

I had also sent it separately to groups of friends who I thought would be interested. One friend Claudia, who is an avid cook immediately set out to accomplish the task of making hot cross buns:

“Jan, I want to make those hot cross buns but I don’t have any yeast.”

“It’s okay, Krisztina said she would pick it up for me – I am still in isolation.”

“Please, let me know, how you make out.”

The next day, I received an email from Claudia with a photograph of the hot cross buns –they looked perfect!

What I did not know was that Claudia had forwarded the recipe to her friend Monique who lived in France.

Shortly afterwards, I began receiving eamils from Monique with questions and comments:

“Jan, this yeast you ask for, I had to ask for it from the boulangerie, the baker. It was not dry but wet and smelly! It seems to work though. He told me what to do with it and I mixed it as he said and now I have the dough. You said the dough would be “springy” to the touch. I had to run to my dictionary to find out this word “springy. You Canadians have funny words.”

“Monique, I think you used the fresh active yeast that professional bakers use. It does work well but has to be mixed differently, as you found out. Good that you were able to get it. Yes, “springy” may seems funny. I meant, if you touched the dough it would seem bouncy or stretchy, like elastic.”

“Oh, I understand now. Well, Jan, finally the dough doubled in size. You said it would take an hour. It took two! Anyway, I moved the dough onto the clothes horse by the window. It was warmer there. It seemed to grow. Or perhaps it was the crystal bowl I changed to? I don’t know exactly, but finally it grew.”

“I am glad to hear that Monique. How did it progress from there?”

“There was not much left to do but punch down the dough as well as I could. Maybe I did too much punching?!!!”

“No, the punching will not hurt the dough. It will give it a better texture, make it more “springy.”

Monique laughed.” Springy, yes it was definitely “springy.” Then, I started making balls. In my view, balls are round – mine are not!!!I have flat, square, irregular balls but maybe there is a Canadian game you play with flat square and irregular balls? No problem! I could see my balls wanted to spread on the parchment paper but hope they would think twice before joining back together. Keep a distance. We are in lockdown! They are French balls after all, unable to follow instructions.”

She continued, “They were dangerously close to one another by the time I was back at the clothes horse to observe their progress.”

“Monique, it’s okay if the dough touches but I don’t think it will if you left a space of two inches (10 cm).”

“You are right. In the end they did not touch. I was also worried they might refuse to double in size again considering it had taken them two hours to do so the first time. It took plenty of time but they rose; they looked like two pancakes on top of each other. I decided to bake them anyway.”

“How did that work out Monique?” I inquired anxiously.

“Baking went fine, I must say. The smell was heavenly! They taste delicious! I had one straight from the oven. I am going to have another one right now, when I sit down with a cup of coffee. I need to rest!!!

“It goes without saying,” Monique explained, “I did follow the instructions – the French way – trying to unravel Canadian words for Hot Cross Buns.”

Though Easter has passed, there’s still lots of baking going on with so many people forced to be staying home during this time, so here’s the link to the original column with the recipe for Hot Cross Buns:  https://www.beachmetro.com/2020/03/28/the-main-menu-baking-can-be-a-comfort-as-preparations-for-a-different-kind-of-easter-begin/