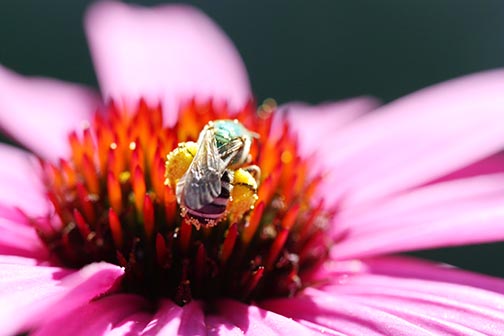 The green-headed sweat bee, shown in the above photo, is the official bee of the City of Toronto.

Picture a bee, and I’ll bet dollars to Timbits that a yellow-and-black striped winged creature comes to mind.

But – surprise! – some of Toronto’s most common bees are solid black, dull green or bright metallic green. Others in the thousands of species around the world can be partly blue, red, orange, yellow or cream. (Fun for kids: draw some bees in your favourite colours.)

In fact, Toronto’s official bee, chosen by city council two years ago, is the metallic green sweat bee (Agapostemon virescens). This tiny critter is all dressed up with a shiny green head and middle, and a yellow-and-blacked striped rear end.

Our city’s bee population goes way beyond the much-publicized honey bee – which was itself imported from Europe.

“In the GTA, we have around 300 species of bees,” said Dr. Sheila Colla of York University. “They are incredibly diverse. Some come out in early spring, some later in the summer. They have evolved under our weather conditions and so are much better pollinators in inclement weather, particularly in spring and summer.”

Our bumblebees, she added, are a good example of native bees’ superpowers. They can raise their own body temperature, so they can get up and about earlier in the year than dozy honeybees. And each bumble can memorize landmarks to find their best food spots, even when it’s cloudy or lightly raining.

Honeybees, built for warmer climates, depend on the sun to navigate their route to food sources. Also, many of our crops, like tomatoes, peppers, eggplants and blueberries, have to be pollinated by bees that vibrate at a certain frequency. Honeybees can’t do this, but many native bees can.

Leave the mess for now, please

At this time of year, our native bees are waking up from their long winter nap (yes, much like the way bears hibernate). So don’t be too eager to clean up your gardens. Last year’s stems and stalks are housing hundreds of sleeping native bees. Even more are snoozing underground, in loose soil or mulch.

If you absolutely cannot stand a messy-looking garden, you can try a couple of compromise solutions: “Cut and drop” dry stems and stalks. They’ll decompose eventually and add good things to the soil. Or “cut and stack” everything you clean up, including leaves. Let sleeping bees lie until the temperature gets to around 12 C on a sunny day, and they come out to work.

Big, fluffy bumblebees are the ones most commonly seen in Toronto, but bees range in size from less than two millimetres (about a doubled piece of thread) to nearly four centimetres (two knuckles of your little finger) in length.

Don’t look for them in picturesque hives, though. Our native bees nest in cavities in stems and wood, and in holes in the ground.

Most bees are solitary and nest in burrows in the earth. Each solitary queen bee takes care of herself and her brood. Other bees are social, and build their individual nests in groups, like a human subdivision. Still others, like our official city bee, live in “condos,” with one main entrance and separate individual nests.

Bees aren’t fond of forests and wet places like creeks and marshes. Even farmland, with its huge patches of a single crop, is falling out of favour.

Surprisingly, cities offer bees a wide variety of nest sites and food sources in parks, ravines and urban gardens. Research shows the average backyard garden will contain more than 50 species of bees, some nesting and feeding there, others dropping by to pick up pollen and nectar supplies.

That means you may run into bees nesting in abandoned furniture, stacks of firewood, decks and fences, and even between house bricks. Patches of bare dirt may also show holes that are nest entrances.

Bees will generally mind their own business, experts say, so try not to disturb their homes – next year’s bees are being raised there. Though bees are generally peaceful, many will defend themselves and their nests if threatened. Best not to swat them and to watch where you step.

Bee season begins in April, peaks in May through August and winds down in September and October. Sheila points out that gardeners can help native bees by growing pollinator plants that flower in spring and fall, when food sources are scarce and bees are stocking up.

In spring, bees will appreciate crocuses, primroses and flowering trees. Late in the summer, they’ll visit black-eyed Susans (Rudbeckia), purple coneflowers (Echinacea) and autumn asters, which all grow well in our area.

Just don’t confuse busy bees with the vicious yellow wasps that show up at the end of summer barging into our outdoor meals. Bees only want flowers; wasps eat anything and seem especially drawn to sandwiches and sweet drinks. Pick your battles carefully.

For lots more information about local bees, go to toronto.ca, search for biodiversity booklet series, tap Biodiversity in the City and download the Bees of Toronto booklet.

Help Dr. Sheila Colla track the health of our native bumblebees by posting photos of bumblebees this spring and summer at https://www.bumblebeewatch.org/