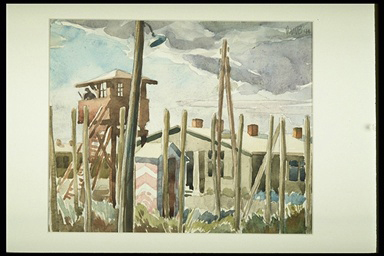 Robert Buckham's painting of Luft Stalag 111. Buckham (inset photo) grew up in the Beach, attended Malvern Collegiate and used his art skills to help forge documents for The Great Escape while he was a P.O.W in Germany in the Second World War.

There isn’t much to celebrate in these troubled times, but May 8 marks the 75th anniversary of VE Day, Victory in Europe Day.

For one Royal Canadian Air Force (RCAF) pilot it was the end of a desperate and brutal march across Europe by thousands of Allied prisoners of war. Flight Lieutenant Robert Buckham’s illustrated diary would become a book, Forced March to Freedom (1984) and later a documentary film (2001).

The flyer was also one of the many young Canadians who helped in the most famous P.O.W. escape of the Second World War.

Robert Buckham was born in 1918 in the midst of the terrible Spanish Flu pandemic. Survival would become the story of his life. Robert grew up on Balsam Avenue and later the family moved to Glen Manor Drive.

He attended Balmy Beach School and became one of the many Malvern Collegiate grads who volunteered for the RCAF. Their biggest worries had been final exams and prom night. Now they were going off to war.

One 1941 photo in the Toronto Star shows a flight training school group of 13 former Malvern students and two teachers, including J. Leslie Kerr who would later become principal at Malvern.

From a young age Robert showed talent in drawing and attended Saturday classes at the Art Gallery under mentors such as Arthur Lismer of the Group of Seven. Buckham became a graphic artist, but along came the war. He served the dangerous mission of piloting a Wellington bomber in night raids over Germany. His artistic abilities would soon come in handy.

On the night of April 8, 1943, Buckham’s bomber was shot down by Luftwaffe fighter planes. The crew bailed out and survived, but Buckham landed in a tree and was seriously injured. Taken prisoner he was sent to Stalag Luft 111, a P.O.W. camp for Allied officers. Another Malvern grad, Hurricane fighter pilot Donald Lush of Pine Crescent was already there.

“I said I was going to major in art there…and I did.”

Buckham spent his days sketching and painting everyday life in the camp and forging documents for the flyers who would break out by tunnel in March of 1944. His number was not drawn for the escape, but that likely saved his life as 50 of the 76 men who escaped were executed by the German Gestapo.

Hollywood would make an entertaining, but largely fictional account of the event in the famous 1963 film, The Great Escape. Everyone remembers Steve McQueen’s adventures, but no Americans (or motorcycles) were actually involved in the escape. (Read Bernie Fletcher’s earlier column for more local connections to The Great Escape: https://www.beachmetro.com/2015/12/01/george-harsh-and-the-great-escape/ )

Read the excellent book, The Great Escape: A Canadian Story by Ted Barris. The author signed my copy, “Now you have the true story to go with the Hollywood myth.”

“A man’s eyes betray his hunger.”

The ordeal of the prisoners wasn’t over. In January 1945, with Russian forces advancing and the end of the war in sight, German captors marched 10,000 Allied P.O.W.s across Europe in the dead of winter.

Gaunt, exhausted prisoners faced starvation and frostbite, sleeping in barns and fields, scavenging for any food they could find. Buckham kept a diary of his Stalag imprisonment and the desperate Long March until their liberation in May 1945.

A villager found and later returned Buckham’s wristwatch, broken in the fall the night his plane was shot down. It had been a 21st birthday gift from his dad who would die aged 58 while his son was still a prisoner.

After the war Robert married Marion McLaren of Beaufort Road at Kew Beach United Church and resumed his successful career as a commercial artist. In 1948, after visiting his wife’s parents, Buckham was driving alone on Woodbine Avenue at Gerrard Street East when his car was struck by an eastbound train at a level crossing. He was thrown 25 feet, but survived once more. He would enjoy a long career and life before dying in 2003 in Vancouver.

The human spirit endures. If you think being captive to an invisible viral enemy is tough, imagine the suffering that POWs went through.

Be thankful for what we have today because of their sacrifices.

Robert Buckham survived hardships we can only imagine and left us with a visual record of events we should never forget. He made his last diary entries on May 3, 1945:

“A roar of cheers; crudely made flags waving; laughter and tears mingling; the guards running off, weaponless; men climbing the wire to run to the tanks; men embracing each other, shouting incoherently; men kneeling to pray; men staring vacantly, bewildered; thousands of men in a state of hysterical, blessed release. It continued for minutes.”