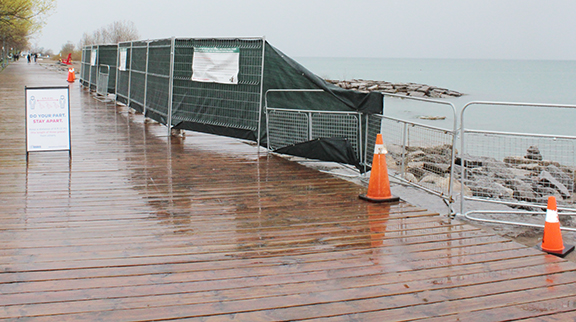 A larger barricade has put up by the Boardwalk to keep the family of foxes living there safe. Photos by Alan Shackleton.

The Toronto Wildlife Centre and the City of Toronto have put up a larger barricade to make sure people walking on the Boardwalk do not interact with a family of foxes who have made a den in the area.

As reported by Beach Metro News last month, a mother fox and her kits have been seen in the area playing and living under the Boardwalk.

On April 23, the city erected a barrier around the area to discourage people from interacting with the fox family. However, there have been a number of incidents in which people have been gathering in the area to take photos of the kits, which are admittedly extremely cute, and also of people feeding the animals.

In at least one case mentioned on social media, someone had reportedly picked up one of the fox kits.

According to the Toronto Wildlife Centre, the constant interaction is making the foxes too tame and they are losing their fear of humans.

“If foxes learn to trust people, which these babies already have, their lives are in danger now and in the future,” said Toronto Wildlife Centre in a statement.

“Not all people are animal lovers and some may harm or kill a fox who acts strangely. Feeding foxes or exposing young foxes to people during this important stage of development may permanently affect them. This will change their natural behaviour, and may ultimately cause their death.” The same information is now included on a sign by the larger fox barrier on the Boardwalk.

People are encouraged to keep moving, make sure their dogs are leashed, and not to interact with the foxes. There is also a notice that the area is under camera surveillance to make sure people do stay away from the foxes.

Beaches-East York Councillor Brad Bradford said that people have been captivated by the foxes in these relatively depressing COVID-19 times, but the well-being of the animals must be the priority and that means leaving them alone.

“Especially at a time like this it’s great to have little stories to help get everyone’s mind off things. That’s how this started and it was nice to see the excitement and enthusiasm,” he said. “Like many good news stories, I think we got a little too much of a good thing.”

He said people are banned from walking by the area, just from feeding or interacting with the foxes.

“Of course if you’re out for a walk, you might hope to catch glimpses from afar but we shouldn’t be seeking them out or interfering with the den,” said Bradford.

While some may feel the installation of a camera, now being called the fox-cam, is an intrusive level of surveillance the situation dictates it to keep the animals and people safe.

“In an ideal world, this wouldn’t be necessary but with the foxes getting attention from across the GTA and beyond, they might be a little too popular for their own good.”