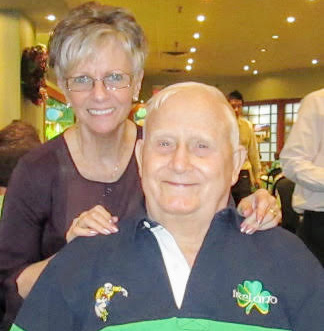 The legacy of Eddie Lynch, a longtime Beach resident and firefighter who is shown here with wife Jocelyne, is honoured today (May 15), the one-year anniversary of his death. Photo: Submitted.

“Eddie helped make the world a better place for a lot of people,” said Jocelyne, his wife and companion of 30 years, in marking a year since he passed.

Edmond Francis Lynch was born in Toronto and lived most of his 83 years in the Beach. An excellent athlete, he played rugby out of the Balmy Beach Club and also was an accomplished squash player.

His life work and his passion were as a Toronto firefighter. On June 17, 1981, 22 years into his career, he was on the fourth floor of a burning building when it exploded and Eddie and two of his colleagues plunged 80 feet into the rubble below.

“In the blink of an eye, my life changed forever,” he recalled.

In addition to smoke inhalation, his injuries included fractures to the upper and lower spine and crushed ligaments in his left leg. He and his two brother firefighters spent a lengthy period in rehab, Eddie the longest at 15 months. He had at least 20 operations over the course of his life, most related to the fateful fire.

When he went back to work in 1983, he was addicted to painkillers and battling an alcohol problem. He entered a treatment centre shortly after, which would begin what was to be his enduring legacy.

“I learned there was virtually no support within the department for firefighters with my kind of problems,” he said. “A group of us with similar problems decided something needed to be done.”

More than 30 years later, the now Peer Support Team is still running, assisting firefighters in the most traumatic of jobs.

Eddie took addiction counselling courses and continued to work with firefighters after his retirement in 1991. He extended his mission to counselling people with addictions outside the department, especially in his Beach neighbourhood.

He was a familiar face at self-help groups and on Queen Street East.

“Eddie’s work in the community was phenomenal,” a longtime friend of Eddie’s recalled. “There are people around today who wouldn’t be if it wasn’t for him.”

Eddie continued to endure the effects of his injuries and underwent heart surgery and kidney treatments. Undaunted and still competitive, late in his life, he took up lawn bowling at the Balmy Beach Club.

When he died of kidney failure on May 15, 2019, Lynn Sciberras, editor of The Mask Newsletter, published in the Toronto FF FireWatch Magazine, dedicated the last issue to Eddie and wrote: “I believe as a result of Eddie’s subtle ways, many brother and sister firefighters are alive today or have been able to survive life’s challenges.”

And many recovered Beachers who are also a part of Eddie’s legacy would echo: “amen to that.”

Eddie’s name will be added to the Firefighters’ Memorials at City Hall, Queens Park, Ottawa and IAFF in 2021, acknowledging his contributions.