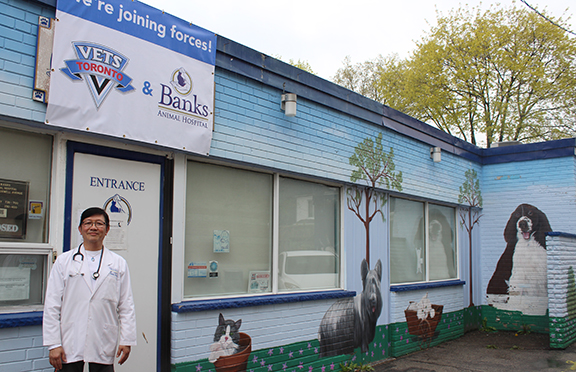 After 83 years of operating as a veterinary clinic on Coxwell Avenue just north of Dundas Street, the Banks Animal Hospital has officially closed its doors for good as of today (Tuesday, May 19).

The practice was started back in 1937 by Dr. Viv Banks who provided veterinary services for horses at the nearby Woodbine Race Track. Since 2004, Banks Animal Hospital has been run by Dr. Ronnie Pusong.

Pusong, 60, said that while the building on Coxwell Avenue is being closed in advance of residential development plans by its owners, he will be continuing his vet practice and serving old and new clients at the Vets Toronto Kingston Road Animal Hospital.

“It’s a bit sad, after it being a veterinary clinic for 83 years,” said Pusong of the building’s closure. “It’s a bit of a landmark in the community.”

Located on the west side of Coxwell Avenue, the low-slung brick building features a painted mural of animals on it and a large sign.

The present Banks Animal Hospital building was built in the 1950s. Prior to that the practice was run out of a large house on the site.

Pusong first joined the practice in 1999 with Dr. Mel Tonken, who also a long-time vet in the East Toronto area. Tonken was well known in the community and even wrote a book about in the 1990s his work as a vet in the area called Animal Crackers: The Outrageous Adventures of an Urban Vet.

Originally from the Phillipines, Pusong came to Canada in 1994 where he began veterinary work in Manitoba.

“I was in Manitoba with large animals, mostly cattle on farms,” remembered Pusong, who lives in the McCowan and Kingston roads area of Scarborough. “Then I decided I would come to Toronto and focus on small animals.”

Joining the practice with the Vets Toronto Kingston Road Animal Hospital, which is located at 1025 Kingston Rd. just west of Victoria Park Avenue, is a bit of a homecoming for Pusong as it was one of the first vet clinics he worked at when he came to Toronto.

Working in East Toronto gave Pusong a knowledge of the neighbourhoods, and he remembered one day in the 1990s making a trip to Coxwell Avenue to have a toaster fixed.

“When I was new in Canada I had a toaster that needed repair and I took it to Butler’s Appliance Store (on the east side of Coxwell Avenue). I remember seeing Banks Animal Hospital’s big sign and thinking I would like to work there someday,” he said.

Pusong said relocating the Banks Animal Hospital to another site was “not an option” and he is now looking forward to being at Vets Toronto.

“We sincerely want to thank each and every client for your many years of loyal commitment to the Banks Animal Hospital. We are excited about relocating to the VetsToronto Kingston Road Animal Hospital location and look forward to seeing you and your pets in the future,” he said in a statement on Facebook.