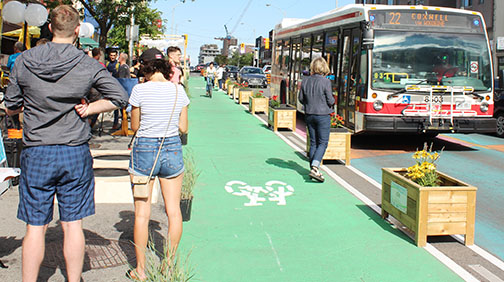 The 8 80 Streets installation on Danforth Avenue last August showed what the street might look like with bike lanes and extended pedestrian space.

Toronto Council has adopted a plan to accelerate bike lanes on Danforth Avenue, and they are expected to be installed by mid-July.

At their meeting Thursday, May 28, councillors passed a series of motions aimed at spending approximately $4 million on Danforth Avenue to create more public space and patios, streetscape enhancements, and an active transportation pilot project for bike lanes.

The decision came partially in response to a petition circulating online with more than 5,000 signatures asking the City of Toronto to implement cycling infrastructure improvements along Bloor Street, Yonge Street, and Danforth Avenue.

On May 14, more than 50 community organizations and thousands of residents across the city signed an open letter to Mayor John Tory and city council recommending the installation of a cross-town ‘spine’ of 40 kilometres of bicycle lanes on Bloor, Yonge, and Danforth. It also recommended an additional 60 kilometres of bicycle lanes to mirror the busiest TTC surface routes, and implement lower speed limits on roads with the new lanes.

It was signed by numerous organizations, including local cycling advocacy groups, who say improved cycling infrastructure is needed in response to physical distancing guidelines prompted by the COVID-19 pandemic.

Cycle Toronto board member Robert Zaichkowski, who started the petition, added “recently announced quiet streets and closures are not enough” for cyclists and pedestrians.

Indeed, data from the City of Toronto shows a steep drop in vehicle use and pedestrian travel since COVID-19 restrictions went into place. Looking at average daily traffic from 7 a.m. to 11 p.m. between March 23 and May 17, relative to numbers in mid-February 2020 (before the pandemic emergency orders were in place), shows the daily volume of cars in the city has dropped by 55 per cent.

Pedestrian traffic has dropped by an average of 75 per cent. Meanwhile cycling traffic has increased by 20 per cent – likely from people choosing cycling over the TTC and also because of the warmer weather seen in the spring months.

TTC ridership has dropped more than 80 per cent, resulting in the city slashing its budget by half.

That drop in traffic has been detrimental for local businesses, including those along the Danforth.

“People who aren’t driving, whether they’re walking, cycling, or rolling, we’re not just going for a bike ride, we’re visiting a business or going to work,” she said.

“Active transportation is the key point, giving people the option without worrying about being unsafe. Even though volumes have gone down for driving, there’s a concern that people will think cycling or walking is inaccessible.”

Shortly after the open letter was sent, the City of Toronto continued to expedite its infrastructure plans on cycling.

Tory announced on May 25 the city was proposing to fast-track the implementation of 40 kilometres of cycling infrastructure across Toronto, including along Danforth Avenue between Broadview Avenue and Dawes Road. As a pilot, it will seek to create new opportunities for patios, dedicated parking, and improved infrastructure for walking, cycling, and other modes of active transportation.

Through the pilot, the city hopes to engage in consultation with local businesses.

However, some BIAs in the area have expressed opposition to more cycling infrastructure.

“GreekTown BIA has been vocally opposed to bike lanes on the Danforth and the negative impact that they will have on our businesses,” GreekTown on the Danforth BIA chairperson Constantine Voidonicolas wrote in a letter to city council.

“There are multiple demands for the use of the road, how do you expect to accommodate parking and loading on both sides of the Danforth, a separated bike lane in both directions, curbside pick-up and delivery, expanded patios, curb lane pedestrian zones, and traffic lanes in both directions?”

As part of its relief strategy for businesses affected by COVID-19, the City of Toronto has suggested expanding patio space for restaurants, bars, and cafes and it’s offered temporary parking pick-up zones and curb lane pedestrian zones under its CurbTO program.

Some business owners and BIAs are concerned that it all might be too much for the limited space outside their doors.

“We have been clear that member opposition to bike lanes would evaporate with a model that protected customer parking and delivery vehicle access,” Danforth Village BIA chairperson Albert Stortchak said. “It’s imperative that we receive clarification on these points, and soon.”

In response to community concerns, Toronto-Danforth Councillor Paula Fletcher moved a number of recommendations relating to the pilot including the creation of new individual or combined patio and seating areas to comply with physical distancing, ensuring sufficient space for loading and unloading zones for supply chain deliveries, maintaining sufficient Green P parking spots on both sides of the Danforth, enhanced pedestrian safety, and sufficient bicycle parking.

“There’s a reassurance that this is not something being done to harm business,” Fletcher said. “It’s to encourage people getting to businesses, and move through the east end.”

“I think it will resonate with residents,” she added.

Cycling advocates say the infrastructure will not only help businesses, but also help residents maintain physical and mental well-being.

He cited the peer-reviewed Bloor Street Bike Lane Economic Impact Study 2009 to 2017 conducted by The Centre for Active Transportation when he added “the myth that parking is essential to small business has been disproved in this case.”

The study looked at the effect of bike lanes on Bloor Street in Bloor West Village and the Annex. Additionally, the city’s point of sale data from the Bloor Street West Bike Lane pilot in 2017 showed that sales volumes increased by 4.45 per cent after bike lanes were installed.

Cycling advocates insist they do not want a solution that negatively impacts local businesses.

“We’re not interested in anything that would harm a business or a living experience,” Mackey said. “I don’t think that’s what will happen.”

“There is a desire to support local businesses, but we’re noticing Torontonians are uncomfortable going to their favourite spots, especially since sidewalks in places like the Danforth are filled with pedestrians and difficult to physical distance safely,” she wrote. “If there was more safe space to walk or bike, I do believe businesses like us will see a needed jump in sales.”

Beaches-East York Councillor Brad Bradford welcomed the petition and council’s decision to go ahead with the bike lane expansion.

He said that with ActiveTO, the city is keen on accelerating the cycling network plan. The accelerated relief he said, will help “get folks out on main streets to patronize the businesses.”

The first cycling lanes are expected to be installed on the Danforth between Broadview and Dawes around “mid-July,” Bradford said.

He said there’s no exact timeline as city staff will work with the business community, parking, city programs like CafeTO (expanded patios) and CurbTO, to determine a solution.

Council will be seeking more input from members of the community and business owners throughout the pilot before final decisions are made in 2021.

Funds for the project are from the city’s capital budget.

“These are measures that make our streets safer for everybody,” Bradford said. “I’m absolutely supportive of it.”