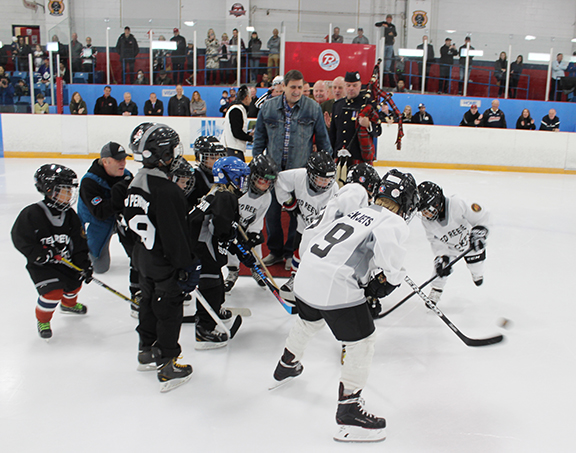 Stephen King, president of Ted Reeve Hockey Association, drops the puck at a ceremonial face-off in advance of a game featuring players of different ages last October to celebrate the association's 65th anniversary. Minor sports leagues are sitting in limbo as they wait for direction from city and public health officials on how to deal with COVID-19.

The COVID-19 pandemic has minor sports leagues for kids across the province wondering what the future will hold for their players this year and next.

The minor hockey season ended abruptly in the middle of March, and summer sports such as soccer and baseball are waiting and wondering whether they will get any organized league play in at all this year.

Michael Clarke, president of the East York Baseball Association, said they are waiting for direction from the City of Toronto on Return to Play policies. As it stands now, field permits for baseball diamonds and soccer fields are cancelled to the end of June.

“We are still waiting on directions as it pertains to Return to Play and what the city deems an appropriate time table to issue permits,” he told Beach Metro News.

“We have been working hard behind the scenes and we are ready to go with a return to baseball once we are given the go ahead from the relevant authorities. Our utmost responsibility is the safety and wellbeing of our community members.”

“Our volunteers, coaches, parents and players allow us to historically ‘hit above our weight’ and be provincially competitive against the larger association in the province,” Clarke said. “EYBA has been fortunate to have a number of Toronto and Ontario championship teams and one national championship team (in 1989). EYBA has also graduated a number of players to U.S. and Canadian colleges and universities as the Major Leagues of Baseball, including Rob and Rich Butler of East York.”

Clarke is hoping there will be some organized baseball for kids played locally this summer.

“We are always hopeful we will be able to provide some level of baseball on the fields this summer,” he said. “We have been working on a number of options depending again on the Return to Play protocols and directions from the city and public health partners.”

He said East York Baseball has getting a variety of reactions and suggestions as to what should be done to deal with organized sports for kids during a pandemic.

“We are hearing everything from there is no way we can have a safe summer of baseball to let’s get out there and play right now, and everything in the middle,” said Clarke.

He said he does not know what the future holds regarding this season or next, but is confident that with its long history and deep community roots East York Baseball will be back and ready to go providing baseball opportunities for local youngsters once pandemic restrictions are lifted.

Soccer is also on hold as summer approaches, with no leagues operating at this time. The pandemic also led the cancellation of the Robbie International Soccer Tournament which would have taken place over two weekends at the end of this month, with finals played at Birchmount Stadium.

While it is of little solace to young baseball and soccer players, they have at least had time to come to grips with the fact that they may not be playing much, if at all, this season. For local hockey players, the season literally ended overnight.

In October of 2019, the Ted Reeve Hockey Association celebrated its 65th anniversary with a number of special events at Ted Reeve Arena. The association was gearing up for its House League Championship Day on April 4 of this year, and also looking forward to seeing the continued success of its rep teams in Greater Toronto Hockey League playoff competition.

However, that all changed in the second week of March.

“On Wednesday, March 11 we were still waiting for official guidelines regarding the future of minor hockey in Canada related to COVID-19. The next day, everything suddenly changed,” Ted Reeve Hockey said in note to Beach Metro News.

“The NBA announced they were going to suspend the season until further notice and then all the other sports organizations followed suit in a quick domino effect. Hockey Canada, who governs minor hockey in Canada, announced that they too were cancelling the rest of the 2019/2020 season. Obviously, the health and safety of all takes precedence over every decision.  At the same time, the loss of the remainder of the season was huge for everyone at our rink, as it was everywhere!”

Ted Reeve said being unable to hold the House League Championship Day was a deep disappointment for the more than 650 players and numerous volunteers in the league.

“This is a fun-filled day for all house league teams with playoff finals, trophies and medals, announcers, smoke machines, spotlights and a ton of good hockey!  It is an annual celebration and showcase of all the kids and the volunteers accomplished through the year.  It was such a loss because everyone really looks forward to it.”

Select programs and GTHL programs also ended abruptly. For the Minor Bantam select team, they were able to have one last practice on the night that it was announced schools would be closing for at least three weeks.

According to mom Maggie Barnes, the players were at first excited about the school closure and were distracted while at their practice and before it.

As part of a team-building process, the players on the team gather at Barnes’ house near Ted Reeve Arena and then walk together as a team to the rink.

“The excitement and chatter spilled out of the house as they collected their gear and made their way to the rink….their focus was scattered on the ice, though we had a crucial game coming up that would determine our standings for the playoffs,” wrote Barnes.

“The adults in the arena knew the inevitable would come but we just waited for official word. By the time they cleared the ice at the end of practice, the announcement came through that games had been cancelled for the next few days. We knew really that was the end of our season. We were grateful, though, that the kids were all together for that last practice – so many others had their seasons dissolved without any resolution. We, at least, had that moment.”

Ted Reeve Hockey said the sudden loss of hockey across the board in Canada in March highlighted the importance of the game to so many.

“The sudden loss of it brought into sharp perspective what the game, the people and, yes, even the pilgrimage to the cold rink, means to us in our lives. We can’t wait to get back!”

Though winter sports have more time before they have to start making decisions, hockey is waiting on guidance from the city and health professionals just like everyone else.

“We are looking forward to our 66th year of putting kids first; ages four to 18,” said Ted Reeve Hockey. “Our Board of Directors, our volunteers and professional instructors are planning for the season, creatively working on ways to accommodate physical distancing measures and to make next year amazing. At Ted Reeve Hockey Association, we are planning for the puck to once again drop this fall or whenever that first face off happens. Our house league registration is in full swing, and we are already at 80 per cent capacity…Our goal is, and always has been, to ensure there is a spot for everyone and to ensure all of our players have fun, develop properly and enjoy this great Canadian game. No matter what next season looks like the Ted Reeve Hockey Association will be ready.”