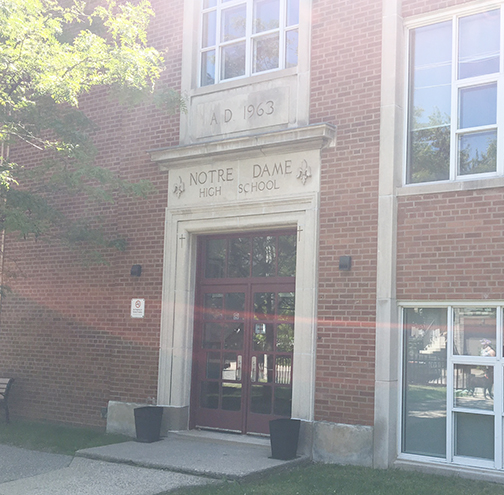 The Toronto Catholic District School Board is looking into concerns of present and former students of Notre Dame Catholic High School regarding racism.

The Toronto Catholic District School Board (TCDSB) is investigating complaints of racism from a number of current and former students at Notre Dame Catholic High School regarding a comment made on social media by a student at the school last fall.

More than 200 letters have been sent to the board about the incident and how it was handled by the school’s administration, said TCDSB Chair Joe Martino in response to questions last week from Beach Metro News.

The letter and incident, which Beach Metro News was first made aware of earlier this month by a Grade 12 student at the Malvern Avenue school, also cited allegations of interference by the school’s administration in connection with a Black History Month presentation being planned by students.

“The Toronto Catholic District School Board (TCDSB) is committed to fostering an environment of equity and inclusion where everyone is respected, valued and welcomed. These allegations are being taken very seriously and as a result, the board will be conducting an external investigation,” said Martino is a statement.

The letter is in template form, and cites a number of “acts of racism within the Notre Dame community” which are of concern to the students and former students.

The social media incident happened last fall in relation to a comment posted by a student who attended a Halloween party and made reference to “police brutality amongst African Americans in a joking manner,” the letter said.

Given the recent events in both the United States and Canada regarding such issues, the post “recently resurfaced on social media in light of the Black Lives Matter Movement,” the letter said. “Students began speaking up about the issue and how it affected them in a negative manner, and their feelings of discomfort.”

At this point, the letter alleges that a member of the school’s administration “threatened to have these students suspended if the posts were not taken down immediately.”

The letter also said the school “attempted to justify the actions” of the student who made the post in the fall “implying that racist comments can be condoned within a party setting or through a joking manner.”

Martino said the TCDSB could not comment on or confirm specific allegations or details in the letter as the matter is undergoing an external investigation.

He added that the board has rules on use of social media that students and staff are expected to adhere to.

“We encourage students and families to review the Student Internet Agreements Student that were signed at the beginning of the school year, as part of the TCDSB Acceptable Use Policy A. 29 and we also encourage parents/guardians to monitor their child’s online activities,” Martino said.

“The policy states in part that: ‘Users will not use the Board’s system to engage in inappropriate behaviours including, but not limited to, cyberbullying, personal attacks, threats, harassment, hate motivated and discriminatory behaviours.’”

The letter to the board also cited comments by a graduate who said students of colour “had to fight” to be able to hold a Black History Month assembly and it was then heavily monitored and reviewed by administrators.

“There were several times during the assembly where the administration censored our voices, edited our own personal experiences, demanded us to include more white people in our presentations, and overall prevented us from talking about the struggles of being a young Black girl,” the student quoted in the letter said.

Martino said this allegation was also part of the external investigation and could not be specifically commented on or confirmed.

He said the review of the content of student assemblies by school administrators is not uncommon.

“The TCDSB is committed to ensuring that the perspectives and experiences of racialized students are represented in the curriculum and that the historic as well as current contributions of the Black community are recognized and celebrated during Black History Month. In order to ensure that content being presentation is consistent with board policies and protocols, student presentations are regularly reviewed before being presented to the school community,” said Martino.