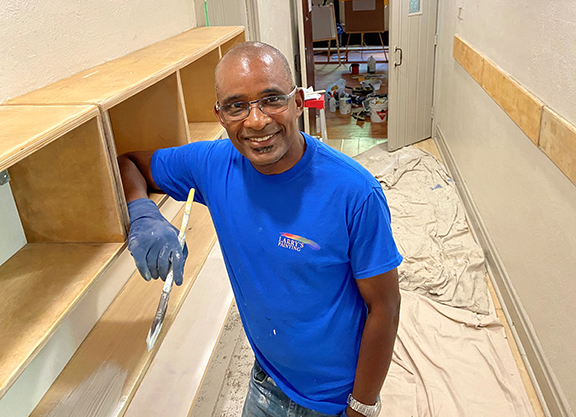 Howard Prendergast, who owns Larry's Painting GTA, says a racially motivated comment was made to him earlier this month by the manager of Nabor's Paint on Queen Street East in the Beach. The owner of the paint store says no such comment was made. Photo: Submitted.

An allegation regarding a racist comment made by a paint store manager in the Beach has been drawing lots of comments on social media this week.

Painter Howard Prendergast, owner of Larry’s Painting GTA, said he was the victim of a racially motivated comment when leaving Nabor’s Paint on Queen Street East in the Beach on June 11 after a dispute about an order.

Prendergast said on a social media post and in correspondence with Beach Metro News this week that as he was leaving the store after the dispute, the manager said that they “don’t need your kind around here”.

In his post, Prendergast said the “manager started yelling at me and saying: ‘What do you think you are doing. We aren’t going to put up this ….We don’t need your kind around here.’”

Prendergast said in his post he was “bewildered” by the comment and told her was simply trying to buy paint.

In a note to Beach Metro News, Prendergast said he had communicated with Nabor’s Paint owner Russell Ward regarding the incident.

“I have asked Russell to explain the comment regarding ‘your kind’ on multiple occasions but he has only responded saying he did not hear the conversation with the store manager. I feel I have no option other than to suspect this situation is hate/racist motivated.”

In an interview with Beach Metro News, Ward said he did not hear the conversation between the store manager and Prendergast as he was at the back of the store. However, in talking to her and another customer who was in line outside the store at the time about it he is convinced that she did not utter a racist comment towards Prendergast.

“She said ‘get out and don’t come back.’ That’s all she said. There was nothing racist said.”

Ward said the dispute over the order had become heated, and he also told Prendergast he would be better served by taking his business elsewhere.

“This was absolutely not a racial thing. It was never an issue. He (Prendergast) was a previous customer,” said Ward.

Prendergast said it was the lack of action by Ward and his position that the comment was not made that led him to post his statement on social media.

Since they appeared earlier this week, they have drawn huge social media response with many people citing examples of poor customer service they had received at Nabor’s Paint.

Ward said people are free to say what they want about his customer service, which he said he needs to improve, but the racist comment did not happen.