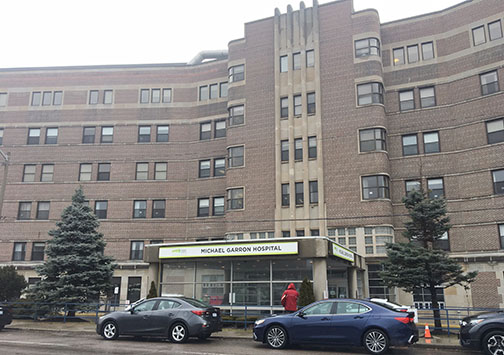 After two nooses were found at the construction site of the Michael Garron Hospital addition site earlier this month, a Fighting Hate in the East End public forum is planned for June 30.

Members of the public are invited to a virtual public forum to discuss the racist hate crime that occurred at a construction site at Michael Garron Hospital on June 10.

Called Fighting Hate in the East End, it’s hosted by Beaches-East York MPP Rima Berns-McGown and Toronto Danforth MPP Peter Tabuns. The forum aims to address and discuss the incident where two nooses were found at an EllisDon construction site at the hospital.

It prompted outrage from the community, the hospital, EllisDon, and elected officials. Toronto police’s Hate Crime Unit is investigating the incident.

“We need to know what steps Toronto Police are taking to charge the perpetrators with a hate crime, how Ellis Don is making their construction sites safe for BIPOC workers and how they and Michael Garron Hospital are caring for the Black workers hurt by this crime,” Berns-McGown said in a tweet announcing the public forum.

EllisDon President Geoff Smith, who will also be attending the public forum, responded to the incident, citing the need for “more work to be done” when it comes to racism in the workplace.

“We have worked extremely hard to ensure a culture and environment that allows people to work free of discrimination and intolerance,” Smith said.

“I know I speak for the entire industry when I say that we do not intend to rest until this kind of behaviour is eradicated entirely,” he added.

Toronto-Danforth Councillor Paula Fletcher called it a “terrifying act of racism” and asked for concrete steps that the construction company was taking to support Black and other racialized construction workers “in what is now a poisoned work place.”

She added that she received several letters and other correspondence from her constituents expressing shock and outrage seeking more information on the matter.

Residents are expected to hear more details on the hate crime and what steps EllisDon and MGH are taking next.

Just last week, two more nooses were found at Toronto construction sites. One was found at Dundas and Sumach streets on June 26, and the other at 81 Bay St. on June 25.

Anyone who wishes to join the discussion is asked to RSVP with Berns-McGown’s office or Tabuns’ office by emailing rberns-mcgown-co@ndp.on.ca or tabunsp-qp@ndp.on.ca, respectively.

After confirming attendance, MPPs’ staff will send out login information to residents for the Zoom meeting the day of the event.