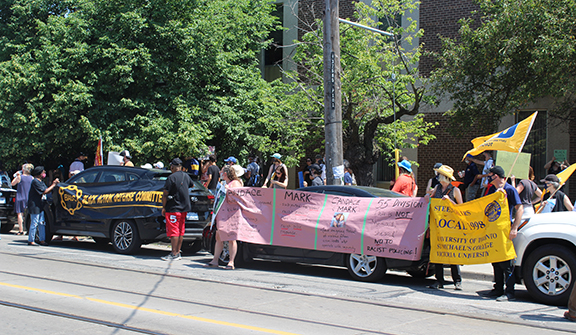 A large crowd took part in a protest against racism and police inaction in front of the 55 Division station on Coxwell Avenue on the afternoon of Monday, July 6. Inset photos: Mark Austin speaks to the crowd at the protest; Beach resident Sapphira Charles, left, and Beaches-East York MPP Rima Berns-McGown took part in the protest.

A crowd of several hundred people protested police inaction against racism this afternoon in front of Toronto police’s 55 Division station.

The Say No To Racist Violence: Community Protest was held in front of the police station at Coxwell Avenue and Dundas Street East at noon to demand action from police regarding a racially motivated attack which took place in Dentonia Park on June 25.

The incident which led to the protest took place in Dentonia Park on the morning of June 25 in which a man and woman were attacked, threatened and subjected to racist insults, organizers said.

The local residents, Mark Austin (who is Black) and his partner Candice Zinkweg (who is white), were the victims of the assault.

Zinkweg was allegedly kicked in the head by a man during the incident, and had to be taken to hospital for treatment of a concussion after the attack.

Austin said police did not take his report of the assault seriously, and even though he identified the man who kicked Zinkweg to the officers who responded at the time they did not make an arrest.

In a speech to the crowd of protestors in front of the police station on Monday, July 6, Austin cited a number of issues with the police and emergency services response to his reporting of the assault both at the time it took place and in the days afterwards. The main issue, though, he said was police’s lack of action regarding the assault of Zinkweg and the threats on his life.

“When they get there they blow me off, they blow off my partner,” said Austin. “She needs to go to the hospital, they don’t even ask her her name. They’re worried about me, the Black guy.”

Austin said that the person he is accusing of the assault also called police about the incident, which had escalated after a dispute regarding a dog not on a leash.

“Why didn’t you take questions then,” Austin asked of police’s actions at the time of the incident. “Why didn’t you canvass the park at that time. That was the perfect opportunity to do that. You failed to do that.”

He was also extremely concerned because he had been threatened by one of the people involved in the assault, and then both he and those he was accusing ended up being interviewed by police in the same space, said Austin

Austin said a follow up visit by a detective was also not handled properly, and he again felt police were not  investigating the incident seriously.

Two hours after the incident, Austin said he was called by one of the officers who originally responded and was told that it passed up to the “investigative department” but it was a “he said, she said thing and there was nothing they could do.”

Austin said he wanted to press charges at the time and still does. He said he was told on Friday, July 3, that police had said nobody wanted to lay charges in the incident and that was why it was not being pursued. Cries of “shame” from the crowd greeted that statement.

“I continually said if it takes me being charged as well, I’ll take my day in court,” said Austin.

He said he subsequently received calls from police after making his concerns public on Facebook and it was announced by the United Steelworkers of Toronto that were organizing protest in front of 55 Division for Monday.

Austin said he was called on the morning of July 6 by a different police detective who told him the investigation was still active.

“On Friday they said no one wanted to lay charges? Now it is being investigated? Who is lying here? The police should be ashamed of themselves,” said Austin.

At 2:17 p.m. on July 6, Toronto police issued a release calling for witnesses to come forward in their investigation of the incident on June 25 in Dentonia Park.

“The Toronto Police Service is requesting the assistance of the public as part of an investigation into alleged assaults between two groups of people,” the release said. “The incident took place on Thursday, June 25, 2020, at approximately 10:30 a.m., in Dentonia Park. It is reported that: – assaults occurred between two groups of people which began with an altercation between dogs in a park.”

Austin said there was a disagreement between he and his partner and the owners of another dog that was running unleashed in the park, and that was what led to Zinkweg being attacked. Also speaking at Monday afternoon’s protest was MPP Berns-McGown who praised Austin and Zinkweg for their bravery in coming forward and bringing public attention to what happened.

She condemned the “systemic racism of the kind that Mark and Candace suffered where white people were permitted to harm, attack Black and racialized people with impunity.”