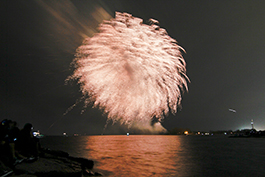 Below is Chapter Four of former Beach resident Keith Black’s book BOOM: A Child of the Beach in Toronto Remembers the 50s.

Every Tuesday over the next few months, Beach Metro News will post up another chapter of the book on our website at https://www.beachmetro.com/ for readers to enjoy. For more information on the book, contact Black at kandjomemee@gmail.com

To see our earlier story on Black, and to read Chapter One, please go to https://www.beachmetro.com/2020/07/14/former-residents-book-looks-back-on-growing-up-in-the-beach-in-the-fifties/

Hard copies of the book BOOM: A Child of the Beach in Toronto Remembers the 50s are now available locally at Book City on Queen Street East and Danforth Avenue and at The Great Escape Book Store on Kingston Road.

BOOM: A Child of the Beach in Toronto Remembers the 50s

CHAPTER FOUR: ‘Of fireworks and Burbee’

I don’t remember where I was either but I assume that I went to school in the morning. I must also assume that when I got home for lunch shortly after noon I told my mother the good news; it was sunny and I could feel the warmth of the sun on my back for the first time in months. It was 57 degrees (14 degrees in newspeak) and it was glorious. The following day it would get to 67 degrees. We kids were just like everyone else; by the end of March we had had enough of the snow, the cold, the ice, the slush and the wind. We longed to shed our heavy winter overcoats and boots. And we had lost all of the mittens that could be afforded.

Like all children who had older siblings, I suffered through hand-me-downs for years. Except when it came to shoes; my brother wore them out as fast as I grew into them. As a result, one of the joys that spring brought was a brand new pair of running shoes: PF Flyers to be exact. And maybe a new windbreaker as well. With my new shoes, a light jacket and dry sidewalks and streets, I felt that I could fly. I guess most kids felt the same way.

Out came the softballs, the gloves and the bats; baseball season was upon us. If there were just a few of us we would play catch or practice fielding grounders. When there were more of us, preferably at least eight, we would get a regular game going; in the schoolyard, at Kew Beach Park, or, one of our favourite places, the empty lot behind Beaches Presbyterian Church on Glen Manor Drive which was simply called the churchyard. But what did we do if there were only two of us as was often the case? We could play catch or we could grab a bat, our gloves, the ubiquitous worn-out tennis ball and a piece of chalk.

Burbee; what a great game! The history of Burbee is murky. Its origin seems to be centred in or in close proximity to the Beach although I have since heard that the game was played in other areas under the names French and Wallball, terms I never heard before and only read of quite recently.  Today, most people have never heard of Burbee. If you Google tiddlywinks you get 1,230,000 results; when you Google “burbee-game”, thousands of results appear about something totally different called Burpee, but nothing about Burbee. Now that’s murky!

Burbee was played in numerous places in the Beach each with its own set of local rules. The one common denominator was the need for a plain wall. Our most popular venue was behind Williamson Road Public School. A rectangle was drawn on the wall of the school about 17 inches wide with the height being from knee height to armpit height of the average player. This was the strike zone.

At Williamson Road there was a wall about 100 feet from the school wall. The bottom six feet was concrete with an additional six feet of chain-link above. If the ball hit the concrete on the fly, it was a double, a ball hitting the chain-link was a triple and, of course, a ball over the fence was a home run. It truly was a great game for two kids and we played it often.

While doing the research for this book, I was pleased to find that the game of Burbee has been resurrected; in Toronto, of course. A group of fellows created an entire league in 2009 and it is flourishing with 16 teams of 6 players representing all areas of Toronto with one being called the Beach Dusters. Obviously they have established their own rules which allow for team play. They have a very impressive website with schedules, standings, stats, and player profiles. It is called the Toronto Burby League. I commend them for the quality of their site, I applaud them for their dedication to the game which gave me so much enjoyment so long ago, and I wish them well.  Even though their ability to spell is somewhat suspect.

Without a doubt spring and summer were our favourite seasons and an annual event that we looked forward to with considerable anticipation was the May 24th weekend, Victoria Day. Was this because of the esteem in which we held the Queen of that name who had been born on May 24, 1819? Well, no. The Monday of the long weekend was Firecracker Day. In the Fifties, there were no fireworks on Canada Day, July 1, known then as Dominion Day. May 24th was it!

The fireworks of the day were generally relatively tame with an assortment of rockets with red and green balls ascending into the sky, brilliant sprays and streamers, dazzling pinwheels, followed by a favourite, the burning schoolhouse.

And then the sparklers were lit and children ran around swinging long pieces of stiff wire emitting bright sparks. They were good for swordfights.  Yikes!

The best place to set off the fireworks was on the beach; the sand provided the perfect medium to plant them and, at the same time, we could see the displays being lit by many others. I remember one year in which we headed down to the beach with our budget-minded bag of pyrotechnics but we were looking forward to an exceptionally thrilling display. One of my uncles whose own children were far too young to participate showed up with a huge bag containing the most impressive collection of large fireworks that we had ever seen. This was going to be a Firecracker Day to remember. And it was!

We hadn’t been on the beach for more than five minutes when we were all forced to flee for our lives. Suddenly balls of flame, vivid sprays of silver and orange and blazing streams of fire were shooting great distances in all directions with an accompanying symphony of very loud bangs, whistles and kabooms. It was all over in about 40 seconds. Apparently my uncle had inadvertently set his paper bag of goodies down on a glowing ember. It was by far the most impressive display that has ever been witnessed on the beach.  And the shortest.

But Firecracker Day brought us more than just one night of fun. While we called it Firecracker Day, most of the devices ignited on that day were fireworks: light displays. Firecrackers, also known as bangers were miniature explosives and they were available for purchase for a couple of weeks prior to May 24 and a few days after. And purchase them we did; they were expensive but we pooled our resources. There were packets of one-inch crackers with about 50 of them strung together which we called ladyfingers. There were packages of individual two-inch ones that exploded with satisfying bangs, and then there were the ultimate four-inch beauties that we called cannon crackers. They went off with very loud and destructive blasts.

When the ladyfingers were set off we would run through them as though through a minefield. The two-inchers we stuck in our shoelaces, lit them and then ran around. Our mothers often wondered why our white laces had black burn marks.Wisely, they didn’t ask. The cannon crackers we lit while we were holding them and then threw them as far as we could to witness the mid-air explosions. Or we used them to blow up sand dams and buildings.

But the best was to put them under empty tin cans, light them, and then watch the cans get blasted 25 or 30 feet into the air. We also lit them and dropped them down through the grates of storm sewers trying to time it so that they would go off before they encountered any moisture. The resulting blast would echo up and down the sewers and probably could be heard blocks away.  We would look at each other with big grins. “Wow, did you hear that?”

And then there was the time that my mother found one last cannon cracker and decided that she would scare all of us as we sat in the living room watching television. She lit it and threw it into the bathtub and shut the bathroom door! Scare us she did! The magnitude of the blast scared her as well; the echoing explosion was positively deafening. She never did manage to fully eradicate the stain on the porcelain.

One time a friend and I were in possession of a small aluminum tube about three-quarters of an inche in diameter by 10 or 11inches long. We filled it with the gunpowder which we had removed from some cannon crackers, soldered a piece of metal to one end and stuffed the other end with some paper and a wick. We stood it up in a tall can and prepared to launch our rocket which we named Condor.

A truly prodigious volume of smoke and flame erupted and billowed skyward totally obscuring our view of what was going on. When it was all over and the smoke had finally cleared, we found the missile a couple of feet from the tin can. Our rocket had failed dismally. It was probably just as well; what we had created was essentially a pipe bomb.