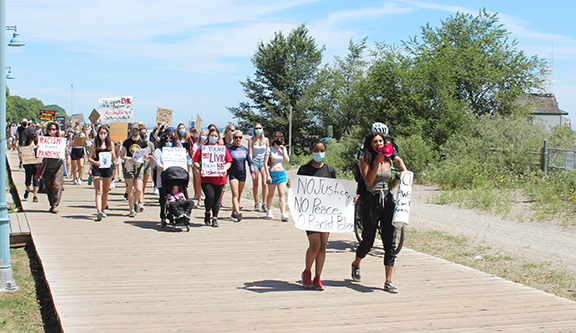 Marchers led by organizers Abi Braybrook and Amany Abubaker walk along the Boardwalk Saturday, Aug. 1, afternoon during a Black Lives Matter anti-racism march in the Beach. Photo by Alan Shackleton.

The march took place on the afternoon of Saturday, Aug. 1. It was organized by local residents Abi Braybrook and Amany Abubaker.

In an interview with Beach Metro News in front of the Leuty Lifeguard Station prior to the start of the march, they said they were very pleased by the large turnout.

“We’re really happy that so many people came out,” said Abi. “It’s easy to do protests online, but actually coming out and taking part in this really makes a difference.”

The march began at the Leuty Lifeguard Station and then headed west along the Boardwalk to Woodbine Avenue and up to Queen Street East where it then went east to its conclusion at the R. C. Harris Water Filtration Plant.

“Hopefully people will see us out here and do some research and learn more about the racism that exists today,” said Abi.

Both Abi and Amany grew up in the Beach and have witnessed racism in a number of forms.

Amany said that it was important that residents in what is an affluent and powerful community in the Beach are standing up and showing their support for Black Lives Matter and anti-racism campaigns.

“We’re so happy with the support,” she said. “The movement is getting bigger in our own community.”

She said that perhaps before there were people who thought that racism did not impact them personally, so they chose to believe it did not exist.

“They were turning a blind eye to it, but people are noticing much more what is going on around the whole city and affecting a larger group of people than they thought,” said Amany.

Among those taking part in Saturday’s march was Beaches-East York MPP Rima Berns-McGown.

She said that being locally organized, the march was a very grassroots event with participation coming directly from area residents.

“People want to learn more and be supportive,” she told Beach Metro News at Saturday’s march.

“It’s wonderful how people are turning out and asking ‘What do I need to do to help?’”

She said that the global outrage sparked by the death of George Floyd in the United States in May after a police officer held his knee on his neck for close to eight minutes has highlighted issues of systemic racism around the world.

Berns-McGown said that the incident has made people everywhere take a hard look at their countries and communities when it comes to racism and what they can to do end it.

Saturday’s march took place on Emancipation Day, which recognizes that on Aug. 1, 1834 the Abolition of Slavery Act became law in the British Empire.

“It’s appropriate that this is Emancipation Day as we are still fighting for true equality,” Berns-McGown said. “It has to be all of us or none of us.”