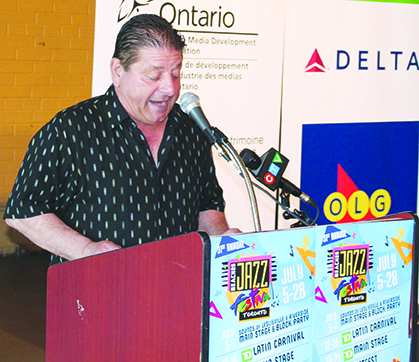 Lido Chilelli, executive director of the Beaches International Jazz Festival, is shown here speaking at the press conference to launch the 2019 festival.

Executive director Lido Chilelli said that they are still collecting numbers for audience views from the online festival that took place from July 17 to July 26, but he can say that the number of views has surpassed 30,000.

“We’re hoping for people to still make donations because we actually have one more event left. But we’re hoping to raise thousands of dollars for Michael Garron Hospital,” said Chilelli.

Originally, Chilelli said the plan was to acknowledge front line workers on stage at East York Civic Centre as a grand finale, but all permits in Toronto for these types of events are cancelled until Sept. 30.

Chilelli said that instead, the last event will be the virtual East York Jam Fest on Saturday, Sept. 19.

“We’ll keep fundraising until that date. We’re confident that a lot of people are going to continue viewing the presentation of the virtual Jazz Festival through Facebook and Youtube, and a lot of people will still be contributing,” said Chilelli.

Despite the 32nd annual jazz fest taking on an unorthodox method of presentation this year due to the COVID-19 pandemic, Chilelli said that the response from the public was positive.

He said that the festival increased its national and worldwide audience, and that they received tremendous support and gratitude from viewers.

“People were really excited that we put something together to bring the community together and celebrate what we have and what we’re going to have,” Chilelli.

Chilelli said that the virtual festival was a great opportunity for musicians to play and be brought front and centre once again for an audience in an otherwise dark and isolated time.

Along with donations to Michael Garron Hospital and putting on a great presentation, Chilelli said there was also another goal for the festival.

“One of the main things we did was that we highlighted all the Beach businesses, that the Beach is alive and to come support local businesses,” he said.

Chilelli said that he is hopeful to have an outdoor Beaches Jazz Fest in 2021, but is keeping in mind there’s a chance that virtual may be the way to go again.

“Everything that we’ve learned from this year we’re going to apply if that’s the case. If not and it’s back to normal, we’ll be very grateful,” he said.

Chilelli said that there were many lessons learned this year and that he wants to enhance the festival experience for musicians, community, and the public.

“We just want to thank everyone for tuning in, watching, and supporting our festival. We look forward to another great presentation in year 33,” he said.