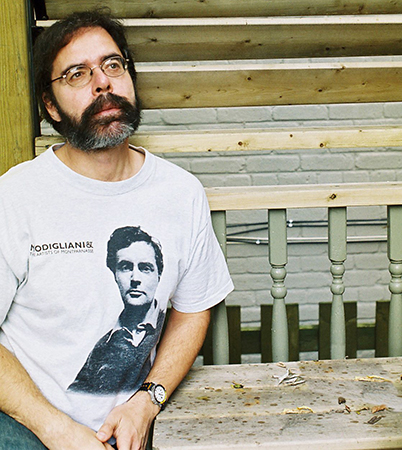 Levy grew up in Montreal and left for Toronto after he finished university in the early 1980s.

“I left because of the political situation in Quebec and also because of greater job opportunities in Toronto. I had about $700 with me, no job prospects, and didn’t know anyone,” said Levy.

Levy said that he first started writing fiction in high school, after one of his compositions was well received by a teacher. He only started seriously writing about 20 years ago.

“I had been working in the corporate world for years at the time and was feeling kind of burnt out, putting in long hours, traveling all around the country. I really needed a vacation so I went to the City of Lights,” he said.

Levy said that he travelled to Paris to follow in the footsteps of many great writers who had lived there like Hemingway and Fitzgerald, like a “literary vacation.”

In his stay there, Levy met owner George Whitman of the famous bookstore Shakespeare and Company. Levy and Whitman struck up a deal that he could stay there in exchange for stocking the shelves, and he met authors from around the world who visited the bookstore.

“Then I returned to Toronto, I realized I should follow my passion and take some creative writing classes, which I did. And shortly after, I started sending my stories out to literary magazines and began getting published,” said Levy.

The Quantum Theory of Love and Madness was published by Toronto-based publishing company Guernica Editions this past spring.

Levy said that publishing a book during the COVID-19 pandemic has been a challenge.

“The book launch (scheduled for the Supermarket in Kensington Market), all of my readings, a book signing at a bookstore…everything was cancelled. I realize that in light of what everyone is going through that this is insignificant; still, for me personally, it was a disappointment,” he said.

Despite these challenges, Levy said that Guernica Editions has done a great job of adapting to the situation.

“It goes without saying that publishers scrambled to come up with new and innovative ways to promote their spring 2020 books. And my publisher, Guernica Editions, was no different. So they organized a book launch online, and all their authors read. Those videos are still available on their website,” he said.

The Quantum Theory of Madness features 14 stories; including a story about a young boy who only sings and never speaks, one about a fallen angel and a man looking to monetize it by showcasing it to the public, and a high-wire performer who delivers religious sermons from his perch and never comes down.

“There’s a sprinkling of what I would call ‘slice of life’ stories with a heavy dose of highly imaginative tales, pure flights of fancy,” said Levy.

Levy said that the short story “Paris was the Rage” was based on his own history.

It’s about a man who is leading a very middle-class life but pines for earlier times when he used to write poetry and lead a much more bohemian life. So he contemplates going to Paris to reconnect with his past, to frequent the same places where all the writers he once used to read about did,” he said.

Levy said that he was inspired by authors like Donna Tartt, Paul Auster, and Haruki Murakami, to name just a few.

“For the most part, I now read contemporary writers. There are so many good ones. The one good thing about reading widely is that you can learn to be a better writer yourself,” he said.

Right now Levy is hoping to get another one of his works published called Original Misfits, and is hopeful a publisher will pick up the novel.

“While I’m waiting I thought I would start on something else; so right now I’m working on a novel about two writers who live together and all of the trials and tribulations they incur while trying to make it in the literary world,” he said.