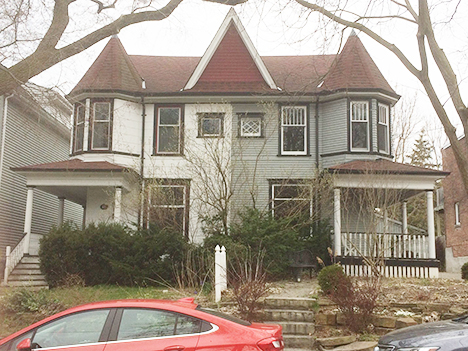 These homes at 40 and 42 Elmer Ave. are slated for demolition. They were built in 1905 in the Queen Anne style. Photo: Submitted.

My first introduction to the Beach was in June of 1973.

A school mate of mine asked me if I wanted to go to the beach. I said what beach, there’s no beach in Toronto? We skipped school and I remember for the first time seeing Lake Ontario in a different way.

We drove south on Kippendavie Avenue through the canopy of trees, looking like a tunnel with the water at the end. Wow, this was cool! Now, 47 years later, I live around the corner and remember that moment. I often think of how fortunate I am, not only to be living in the Beach, but also Toronto and Canada, especially during these new times of ours.

The chiming of Corpus Christi’s Church bells in its 100th year anniversary are wonderful to hear during the pandemic and take me back to a simpler time.

Did you know that Queen Street East in the Beach was once voted the Best Main Street in Ontario and won an award from TVO in 2002?

After living in the Beach for 40 years now I always love being invited into the Beach along Queen Street (formerly Maple Avenue) from the west, and passing what I call our “twin towers”. The fire station on the north and the Henry Hogarth Residence, 1903 Queen St. E., on the south.

The Henry Hogarth residence was built in 1893. It preceded the fire station. A few years before the fire station was built this area was a dairy farm. Smith’s Dairy Farm was located north of Queen Street to Kingston Road and from Woodbine Avenue to Elmer Avenue. The property at 1903 Queen St. E. is now up for sale. It is partially protected by being listed with the Toronto Historical Preservation Services. Henry Benjamin Hogarth (1858-1940), the builder, was the eldest of at least eight children.

Emily and her young child died in the early 1890s, not long after the marriage, and R.C.H. remarried and lived until 1945.

Henry Hogarth died in the home on June 26, 1940. He lived there for close to 50 years. He is buried in St. John’s Norway Cemetery.

The former Henry Hogarth Residence has been in need of work for years. I hope the new owner will bring this house back to its original shape and glory.

Time and thought went into this Bay and Gable designed style of home. For me it is homes like these that add so much character to our area and make the Beach.

It is sad to think that some of these homes are usually replaced with what I call square boxes. Some people call this progress – not me.

Now I don’t like every design of house, but homes like the Hogarth Residence to me, make areas such as ours unique.

Around the corner from 1903 Queen St. E. the two beautiful homes at 40 and 42 Elmer Ave. will soon be demolished. In the near future they will be a vague memory. They were built in 1905 and are of Queen Anne style having an identifiable character of a low rise, turreted, two-storey sloped roof appearance. The wrap around porches add a welcoming feel to the entrance.

Not only residences, but retail stores have left us and are now memories from days gone by. To name a few are the Balmy Arms, Griffith’s, Nova Fish and Chips, Scratch Daniel’s, Nevada, Lido’s, Fitzgerald’s, Hobbit Town, Miracle’s, Surf Sailor with the wind surfing board projecting out from the store front, the original Gio’s and Whitlock’s where the minstrel used to swing by the tables playing his tunes.

Cherish what you see now, it may not be there tomorrow because as Bob Dylan says: The Times They Are A Changin’. Please support our local businesses.