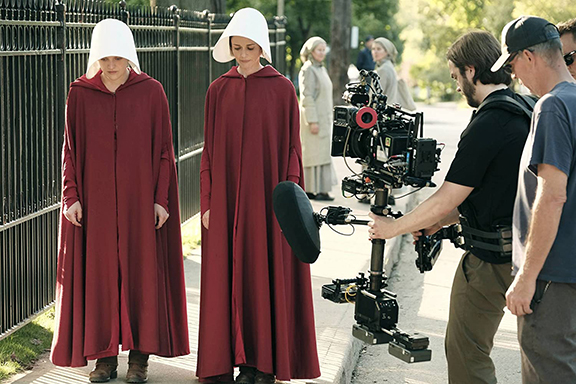 Alexis Bledel and Elisabeth Moss have both won Emmys for The Handmaid's Tale, which is filmed in Toronto.

It’s 2020 and yet people around the world still need to fight for basic human rights.

The Emmy Awards (on Sunday, Sept. 20) will be acknowledging the strong performances by talented women in each of these mini-series.

Self-Made: Inspired by the Life of Madam C. J. Walker (Netflix) tells the mostly true “rags-to-riches” story of an African-American entrepreneur who overcame every obstacle to become successful in the early 20th century. Oscar-winner Octavia Spencer is nominated as Lead Actress in a Limited Series or Movie.

Mrs. America (FX) portrays the leading American figures in the fight for and against gender equality and the Equal Rights Amendment in the 1970s. The show has 10 Primetime Emmy nominations, including Cate Blanchett (as conservative Phyllis Schlafly), Tracey Ullman (as Betty Friedan), Uzo Aduba (as Shirley Chisholm) and Margo Martindale (as Bella Abzug).

Feminist icon Gloria Steinem is played by Rose Byrne. Watch for Julianne Moore to play Steinem in a new feature film, The Glorias, out Sept. 30.

The Handmaid’s Tale (Bravo) also has 10 Emmy nominations going into the Sept. 20 ceremony. The series gives us Margaret Atwood’s harrowing depiction of a dystopian future where women’s rights are completely taken away in a totalitarian theocracy.

Alexis Blodel and Samira Wiley have nominations this year and both have won in the past for their roles. The acclaimed show has won an incredible 69 awards from around the world and the red and white handmaid’s costume has become an iconic symbol in the Me Too movement.

It’s been more than 100 years since the suffragettes won the right to vote in Ontario (1917) and in the United States (1920). Black women were left behind. Sarah Breedlove (1867-1919), better known as Madam C.J. Walker, did not live to see civil rights for women or African-Americans. She was the first child in her family to be born free of slavery. Starting out with nothing, Walker built a hair-care empire that saw her become possibly the first self-made woman millionaire in the U.S.

The turmoil of the 1960s, like today, led to the struggles for civil rights for all. Mrs. America features a brilliant performance from Cate Blanchett as Phyllis Schlafly who led the opposition to equal rights for females. The series points out the irony of a strong, ambitious woman working against equal rights while wanting powerful men to take her seriously. (The 1950s just called….they want their aprons back!)

A talented cast portrays the leading feminists on the other side of the struggle. It’s a slippery slope from the anti-feminists to the authoritarian leaders of today and the nightmarish, repressive rule of a future Gilead.

While all three of these shows deal with the American experience, Toronto is a setting for part of The Handmaid’s Tale as oppressed people try to reach freedom In Canada with echoes of the Underground Railroad.

Cynthia Erivo received an Oscar nomination last year for her powerful performance as Harriet Tubman (c. 1820-1913) in the film Harriet. Tubman was the most famous “conductor” on the Underground Railroad, leading many ex-slaves to freedom. She lived in St. Catharines from 1851 to 1859 and later became an activist for women’s suffrage.

The Handmaid’s Tale was all set to film its fourth season when COVID-19 got in the way. Each season has featured Beach locations, including a beautiful house by the water, the lake itself east of the Boardwalk and St. Aidan’s Church as the Red Centre.

Mrs. America used the former Lever Brothers soap factory at the foot of the Don Valley Parkway as a location. While these shows deal with very serious topics, it is fun to try to spot Toronto on the screen.

It’s been a difficult year, but maybe we can all learn something from the experience. We are all only one step from disaster and we have to give a helping hand to our fellow man…and woman!