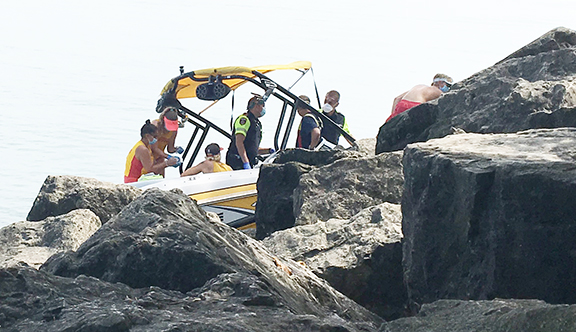 Emergency workers are seen in the motor boat shortly after the Sept. 3 crash at the far west end of Woodbine Beach. Photo by Alan Shackleton.

A 46-year-old man is facing a charge of criminal negligence causing death in connection with a motor boat crash off Woodbine Beach in early September that took the life of a 47-year-old man.

Toronto police announced on Sept. 17 that Thamilagan Olivernicholas, 46, of Markham, had been charged in connection with the incident which took place just after 12:30 p.m. on Thursday, Sept. 3.

Along with the operator, there were six other people on the boat at the time of the crash, police said.

It took place in Lake Ontario just off the far west end of Woodbine Beach.

Initial reports indicated the yellow and white bowrider motor boat appeared to hit some rocks in the lake before ending up sideways along the rocky shore of the Ashbridges Bay Park point at the far west end of the beach.

For an earlier Beach Metro News story on the crash, please see: https://www.beachmetro.com/2020/09/04/police-appeal-to-witnesses-of-fatal-boat-crash-off-woodbine-beach-to-come-forward/