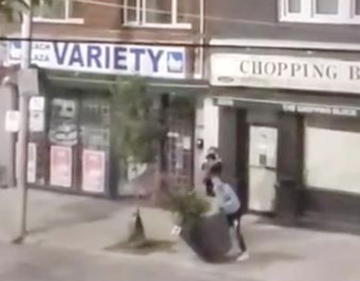 The Beach Village BIA released this and other security camera images of vandalism taking place along Queen Street East near Willow Avenue on the night of Sept. 11.

Residents and businesses are frustrated over repeated acts of vandalism in the Beach Village area.

The photos were collected from surveillance systems of nearby businesses.

In the photos, two individuals are seen pushing over a planter and casually walking away.

“We have footage from two different businesses of these guys pushing over planters, and peeing on front steps of businesses,” she said. “We’ve passed everything along to Toronto Police Services to keep a watch.”

Last week before the Friday incident, police apprehended a suspect in the process of pushing over a planter. Officers learned that the individual was having a mental health crisis and he was taken to receive help.

“I was so frustrated,” she said. “We ran the photos just it get it out there so people are aware.”

“There have been other planters pushed over,” Janice Graham wrote.

Sebert said there is no update from police on the investigation due to relative nature of the crime. She is hoping residents can keep an eye out for vandalism and provide police with more information if they spot it taking place.

The planters are owned by the Beach Village BIA, which represents approximately 300 businesses in the area along Queen Street East between Neville Park Boulevard and Lockwood Road.