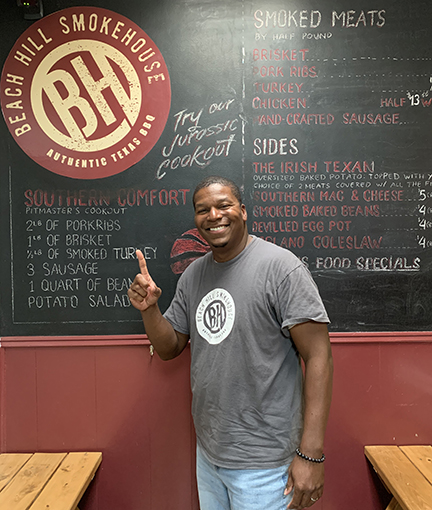 Darien List is the owner of the Beach Hill Smokehouse. Photo by Mimi Liliefeldt.

Lately there’s been much discussion of how to find our way towards racial equality. With so much information out there, it’s hard to know where to look for the right answer.

Darien List believes we need to start with role models in our communities.Darien is the owner of our neighbourhood’s wildly popular Beach Hill Smokehouse.

Originally from Buffalo, New York, List grew up in a predominantly Black neighbourhood. He was one of the lucky ones with two loving parents who raised their family with strong values in the church. He said he is grateful for the support and faith they provided.

Without these solid foundations things could’ve been very different for him, he said. “I had friends that went down different paths. I never judged them, I knew they felt they had to do certain things to survive.”

Darien also had sports to keep him busy and out of trouble. At 14 he started working for his uncle whom he looked up to. “My uncle owned investment properties and we would paint them. This is where I saw another way. That sparked my interest and was the window into me wanting to be a business owner.”

After high school Darien took two years to work and save money, and to figure out what he wanted to take in university.

When he got to Grambling State University in Louisiana he majored in Criminal Justice. “I wanted to know why people turn to a life of crime,” he said.

Darien eventually met his wife Eloise at grad school and carried on to earn his Masters.

While studying and working in Buffalo, the couple realized they were expecting their first of what turned out to be four boys.

“I needed to make some money, we couldn’t eat books”, he said with a laugh and decided to pursue real estate like his uncle. “In doing so, it continued to lead me down my entrepreneurial path.”

He said this because property ownership was not his first foray into business.

“At Grambling I used to sell outlet mall basketball jerseys, then make double or triple their worth on campus”.
He also used to drive his car at midnight to burger chains and ask for the burgers they were going to throw away to bring back to his dorm to sell to hungry, car-less students. Darien had a natural entrepreneurial spirit and the knowledge that growing up sometimes money would be tight.

Today Darien has fulfilled his dream and is the proud owner of some of the best BBQ in the city.

He and his wife (originally from Toronto) moved to Canada to build a better and safer life for their family. But it hasn’t been an easy road.

He has faced a lot of challenges from a few neighbours that made it abundantly clear he was not welcome.

When I asked him what kept him going, he said, “Doing what I’m doing is change. I want to be an inspiration of what you can do. When we work together, good can happen.”

He sees the good in his staff and tries to elevate them, the good in the rest of the neighbourhood that has supported him and is grateful to the ones who have stood up for him.

Leading by example is a big theme in Darien’s life, especially for his kids.

“I try to show them, I don’t just talk it, I walk it. They see me everyday and how I interact with the community.”

Sometimes rising above injustice isn’t easy, but he knows from experience it’s the better way, the safer way. “I tell my children, ‘I’ve lived it. Whether they’re right or wrong, be respectful. Do whatever you can to come home safely. We have to work extra hard, be extra careful, and be extra aware of every situation we’re in. Be the change the world needs. My fear is everyday. The world we live in is not really designed for us.”

Darien doesn’t take any of these responsibilities lightly. He understands the power each of us has to attain our goals and create positive change. “We need to educate our communities and work towards inclusiveness.”

Darien is the role model we all need right now. He challenges himself to carry the weight of racial inequality. “It’s not just for my family, it’s for the entire community. I have to represent for a lot of people,” he said.

“I want every person of colour, to see this story here and think ‘I can do it’. I came from the worst community. If I can make it out, you can too. Don’t let the system break you. That’s the message. I was never gonna give up. I don’t want anybody to feel they have to give up.”