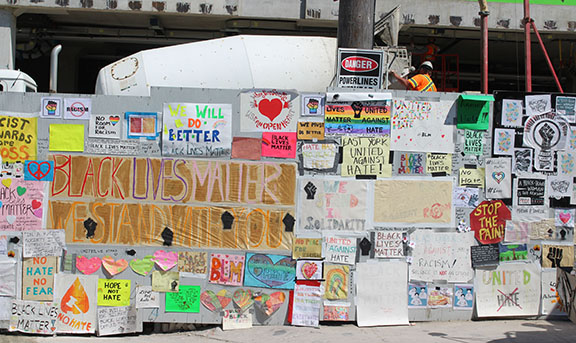 The president and CEO of Michael Garron Hospital says construction company EllisDon needs to do a better job combating racism at its work site on the hospital’s expansion after two more nooses were discovered there this week.

“This pattern indicates a systemic problem. Although we have been reassured by the efforts made by EllisDon and others to address the racism in the construction industry, it is clear that they need to do better,” said Sarah Downey, president and CEO of Michael Garron Hospital in a release on Friday, Sept. 25.

Two nooses were found on the construction site on Thursday, Sept. 24. It’s the second time such an incident has taken place, as nooses were also found at the site on June 10.

“I am committed to addressing systemic and overt racism within our organization and the health sector and will hold EllisDon and all of our partners accountable to do the same,” Downey said in the statement.

Thursday”s incident is under investigation by Toronto police, as it the June 10 incident.

After the June 10 incident, the East York community came together to create a wall of art filled with messages against racism on the construction site wall facing Sammon Avenue.

“These despicable acts of racism are not reflective of our hospital community. While we will not let incidents of hate define us, we will call out these insidious acts whenever they take place,” said Downey in her Sept. 25 statement.

“Following the first display of nooses on the construction site in June, we were overwhelmed by the outpouring of support from our employees, neighbours, community and local businesses,” she said. “They surrounded our hospiyal and the construction workers who work there in support with a display of anti-racism messages. We further cleansed the site a healing ceremony before the final structural beam, symbolically named the Unity Beam, was place in our new building in August. What took place on September 24 was an overt attempt to dismantle the reconciliation work our community and hospital has done to heal.”