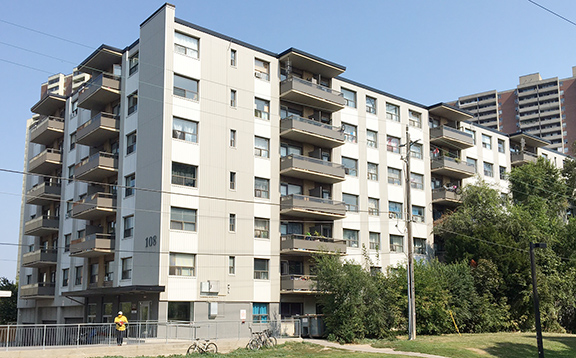 The eviction of a tenant at 108 Goodwood Park Court was prevented earlier this month by a tenants' union. Photo by Alan Shackleton.

A group of tenants at 108 Goodwood Park Court prevented an eviction this week, and it is the first real response in the neighbourhood against evictions.

The Goodwood Tenants’ Union formed in response to the provincial Bill 184 and increased evictions resulting from the COVID-19 pandemic.

On Monday, Sept. 21, union members and other tenants and supporters came between a sheriff sent by Ranee Management during an attempted eviction.

The union maintains that the tenant was informed by Ranee that they would be required to vacate the unit by Monday, Sept. 14 or the sheriff would evict them.

The tenant who lives there is an Indigenous woman with health issues, tenants said.

The incident led to Toronto police officers arriving at the scene, where tenants gathered and prevented the sheriff from evicting the woman.

Alongside the tenants was Beaches-East York MPP Rima Berns-McGown who remains supportive of the tenants’ unions.

“Goodwood and Crescent Town have groups of tenants coming together to try to protect each other and other vulnerable tenants,” Berns-McGown said. “A lot of these folks have lost income because of COVID-19, lost their jobs, or have fewer hours.”

If a pandemic didn’t make things challenging, the provincial Bill 184 certainly did, she said.

The bill introduces updated legislation governing landlord-tenant relations in the province. One glaring element is landlords can negotiate deals with tenants to pay rent, leaving them vulnerable in many instances, Berns-McGown and the unions said.

They instead would like to collectively negotiate an agreement with the landlord. In individual negotiations, she said the tenants feel pressured.

“Under Bill 184, if you agree to a repayment plan that you cannot manage, if you’re a day late or a dollar short, you can get evicted,” she said, calling it a “monstrous set of circumstances.”

Beaches-East York Councillor Brad Bradford, while closely following and engaging with tenants, said the city is limited in its response due to the provincial legislation. He believes the tenants organizing in response is a good thing.

“I’m here to speak out and support the efforts to help members of the community who are being marginalized, targeted or worse,” he said.

Bradford said city councillors can focus on ‘renovictions’ as the city is responsible for approving building permits required for renovating units. Landlords can evict a tenant on the excuse of renovating the unit.

“What we’re seeing with a small but significant group of predatory landlords in our community is disturbing,” he said.

“Evicting tenants on the back of a global pandemic is unequivocally wrong and unacceptable,” Bradford added. “The message has been clear, they need to stop evicting people in the middle of a public health crisis and find a path to work together.”

Ranee Management did not respond to a request by Beach Metro News to comment.