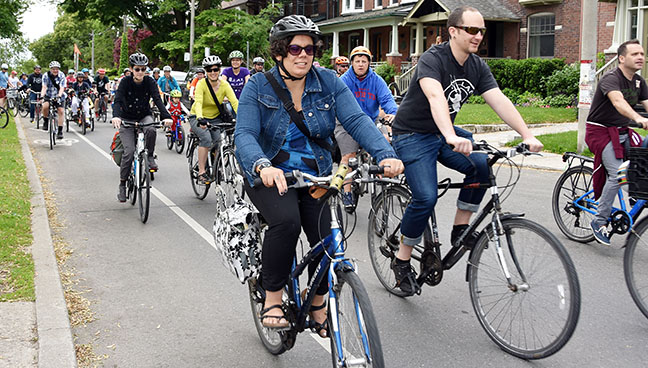 Cyclists begin the Bells on Danforth ride in this Beach Metro News file photo from June of 2019.

Toronto’s cycling advocates say “keep going” on the city’s expanded bike lanes that were installed over the summer in response to COVID-19.

In response to what it says is a “long-sought for achievement,” cycling advocacy group Ward 14 Bikes is hosting a Bloor-Danforth Celebratory Ride on Sunday, Oct. 4.

Groups of cyclists from all over the city will ride on their local section of the new Bloor-Danforth bikeway to celebrate the installation in addition to Ward 14 Bikes participants on Danforth Avenue.

East Toronto riders can meet at 725 Logan Ave. at 10:30 a.m. to just west of Withrow Park and north of Hogarth. The ride will begin at 11 a.m. It will take place entirely on the separated cycling lanes on Danforth Avenue.

He’s thankful for city staff and the multiple departments that worked to install the bike lanes which were part of the Destination Danforth COVID-19 recovery program, and also applauded Toronto-Danforth Councillor Paula Fletcher and Beaches-East York Councillor Brad Bradford for their advocacy.

“It was a fantastic job putting it together in a short period of time,” Brown said. “We’ve been on the patios more often than we would’ve been, as we’re always happy to support local business.”

Brown thinks the lanes have been a success but adds there’s more to be done.

“Why stop at Dawes?” he asked.

Brown said and other cycling advocates agree cycling lanes should keep going and expand further east, west and even north.

“You can’t move traffic by building more roads, you’ve got to get people out of their cars,” he added.

He includes Yonge Street on the list of locations for future cycling lanes, and hopes that there is more to come in 2021.

“As a cycling advocate, I say more and more,” Brown said.