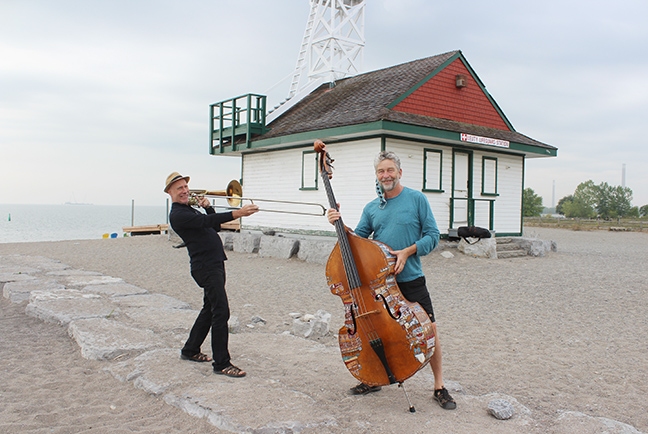 A pair of local musicians are working on bringing live music back to the Beach.

Due to the COVID-19 pandemic, it’s going to be done on a very small scale and safety will obviously be the top priority for everyone involved.

Tim Dawson and Tom Allen are organizing concerts at local churches in the coming days, weeks and months.

The return to live music starts this week with The Last Curlew concerts presented by Allen at Beaches Presbyterian Church. The concerts are slated for Oct. 1, 2 and 3 and will be limited to an audience of 25 for each performance.

A musician, composer and CBC radio host, Allen said that the audience size for the concert had been reduced to 25 from what was originally planned to be 35 people because it was the “prudent” thing to do.

He said that with COVID-19 numbers increasing across Ontario, and especially in Toronto, that organizing concerts with musicians performing in front of live audiences is extremely challenging.

“We just don’t know what’s going to happen next,” said Allen. “We just have to be flexible. We have to be willing to adapt as people are already doing.”

If someone told him a year ago he’d be holding a concert in Beaches Presbyterian Church for an audience of only 25 people, he said he would have found that hard to believe.

“These are strange times,” said Allen, adding that what local concert organizers want to do now is start the process of sharing live music again.

“Having a chance to perform is important for the artistic community,” said Allen.

Musicians, artists, actors and other in the arts have been hit very hard by the impacts of the pandemic on their livelihoods

He said the fact this week’s concerts are taking place is “exciting” and he and the performers taking part are very much looking forward to it.

The Last Curlew concert is inspired by the environmental novel The Last of the Curlews by longtime Beach resident Fred Bodsworth. The concert will feature music by Alexina Louie, Ralph Vaughan-Williams and R. Murray Schafer. Performers will be Lori Gemmel on harp, Etsuko Kimura on violin, dancer Julia Aplin, and readers Tom Allen and Annika Broadhead.

All tickets have to be purchased in advance for these concerts by contacting Allen at tomallenmicroconcerts@gmail.com. For the most up-to-date information on tickets and concert performances for The Last Curlew this week, contact Allen by email.

Dawson is preparing to begin this year’s Kingston Road Village Concert Series with a pair of performances on Oct. 17.

The number of audience members will be limited to 50 for each concert, and they will take place at Kingston Road United Church.

A member of the Toronto Symphony Orchestra (TSO), Dawson has been organizing the concert series for a number of years but no season has ever been like this one.

“We have to do it safely, that’s the most important thing,” he said. “Concerts can only come back if done safely.”

Dawson said the concerts will be staffed by volunteers, who direct people to their seats in the church where the audience and performers will all be physically distanced. Also, on days when two concerts are taking place one side of the church will be used for seating for the first show and the other side of the church for the second. Audience members will also be asked to pre-screen and all safety measures are being taken.

He agreed with Allen that the impact on musicians due to COVID-19 has been severe.

“The entire musical world has been rocked to its core. Performances (to large audiences) were among the first things to be cancelled and will be the last to come back,” he said.

The Kingston Road Village Concert Series plans to limit its audience numbers for this season is a way of “doing something in the interim,” said Dawson.

The concert is an official TSO event and will support Sistema Toronto, which provides musical and intellectual opportunities to children in vulnerable communities with the goal of transformative social change.

Other planned Kingston Road Village Concert Series performances for this year are scheduled to take place up until just before Christmas.

On Saturday, Oct. 31 and Sunday, Nov. 1 (both at 2 p.m.) the TSO Woodwinds perform the Poulenc Sextet for piano and winds, Mozart quintet and more. The concert will feature flautist Leonie Wall and her woodwind quintet along with pianist Monique De Margerie.

On Saturday, Nov. 14 (at 2 p.m. and 4 p.m.) TSO Musicians play Bach will be performed. The concert will see bassist Dawson, associate principal flutist Julie Ranti and friends perform music from Bach’s Orchestral Suite No. 2 in B Minor, a Rossini string quartet and more.

On Saturday, Dec. 5 (at 2 p.m. and 4 p.m.) TSO principal cellist Joseph Johnson and friends will perform a program of string sextets by Brahms, Schubert and Margaret Price.

On Saturday, Dec. 19 (at 2 p.m. and 4 p.m.) TSO Musicians Brass Ensemble will perform festive Christmas music and more. The concerts will feature associate principal trombonist Vanessa Fralick and her ensemble.