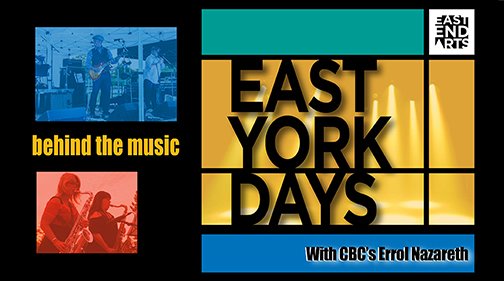 East York Days: Behind the Music! wraps up with an online visit with Joanne Morra, and Amelie Lefebvre and Les Singes Bleus (shown in inset photos).

East York Days: Behind the Music! wraps up with its final online session tonight (Sept. 30).

The presentation brings participants “behind the music” to learn more about the journey and artistic process of musicians and the stories behind their songs.

“This year you’re invited to join East End Arts and the host of CBC’s Big City Small World, Errol Nazareth, for an updated version of our annual concert series, East York Days: Behind the Music!,” said East End Arts on its website. “While we may not be able to gather at the East York Civic Centre for what would have been our third summer of East York Days, we are keeping the spirit and celebration of local music alive and well this year, but with a fun, new digital twist.” Morra began her career in visual arts at York University where her powerful singing voice became apparent. For almost 20 years, she has sung jazz, blues and funk across the Greater Toronto Area.

She has performed at a wide range of venues including The Spadina Theatre, The Liberty Grand, The Reservoir Lounge, 120 Diner, Castro’s Lounge, Coquine Restaurant, The Silver Dollar, Gate 403, The Local Gest, The Spoke Club, The Scarboro Golf and Country Club, The McMichael Gallery, The Gardiner Museum and Heliconian Hall.

She released her debut album Alouette in 2017. They are a band that is hard to put a label on and they continues to delight and confound with their new album Entre Nous.

For information on how to take part in tonight’s presentation, please visit https://eastendarts.ca/east-york-days-behind-the-music/