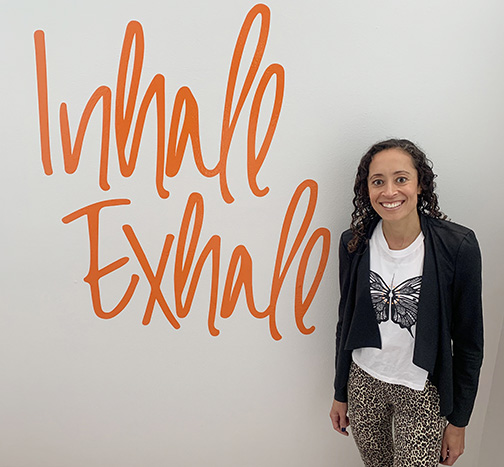 People think how you choose to wear your hair is fairly arbitrary. For the most part, if you’re a white person, this assumption is true. For a woman of colour this decision can influence how the world perceives you, and we know it.

Liz Doyle Harmer is the co-owner of Afterglow Yoga Studio on Queen Street East a Life Coach, and mother of four.

If you saw Liz five months ago you might’ve assumed she was white. She has bright eyes, a big smile and warm brown hair. The reality is her mother is Black from Jamaica and her father is white.

Liz was born and raised in Orleans, a suburb east of Ottawa.  “There weren’t a lot of interracial families back then,” she said.

In her mostly white neighbourhood, she found a group of friends that came from diverse backgrounds. “We were the people that didn’t really fit in. We found each other and stuck together,” she said.

But having a diverse group of friends couldn’t shield her from the natural curiosity and occasional mean-spirited remark from other kids.

“The comments that bugged me the most, were about my hair. They made comments about my nose and my skin, but it was the ones about my hair that would bother me,” said Liz. “Sometimes they weren’t even trying to be mean. They just made me feel like I was different, and at that age you don’t want to be different.”

For years, her way of coping was straightening her curly hair. She’s light skinned so doing this made her look more white.

Her husband once asked her, “Why don’t you just leave it curly?” Her response was “because it’s not professional”.

Now she says, “I don’t care if it’s not professional, it’s my hair, this is how it grows out of my head”.

This confidence is new for Liz. She stopped straightening it since the Black Lives Matter, she said. “Suddenly it feels like it’s OK to be your colour. I don’t have to pretend to be white all the time.”

When I asked how that made her feel she replied: “Part of me is pissed, because it’s been exhausting to not be my colour my whole life. And I’m only half Black, which has been a blessing and a curse. I could pass as white, but then I was holding in a whole side of me. Not being yourself is exhausting.”
Now that she’s been wearing her hair curly, and openly accepting her Black roots she has had a sense of release.

She said she’s no longer hiding who she is.

She is learning to embrace her race and connect more with her family.

But with all meaningful change, there comes some discomfort; she feels more attune to the reality that perhaps certain people might treat her in a negative way.

For a woman of colour there’s an awareness that comes with this seemingly innocuous decision to stop straightening ones’ hair. The understanding that many of us know all too well is that being a visible minority is a liability.

The strange truth that emerges is that a decision on how to wear our hair can be a social statement. The statement Liz is interested in making now is about change, and helping people, including herself shape it.

She is changing how she shops to actively support Black-owned businesses. She is part of a wonderful group of neighbourhood friends that are reading and learning more about race.

Liz and her business partner are changing part of their outlook to create a yoga space that supports many kinds of activism, and wholeheartedly presents itself as a safe and inclusive place.

But the biggest change has been and will continue to be in herself.

“I want to become more comfortable being a Black person. Trying to fit into white culture has been about survival, but sometimes the things we do to keep ourselves safe robs us of a lot more.” she said.

Liz Doyle Harmer and her hair are ready to be perceived as a Black woman.