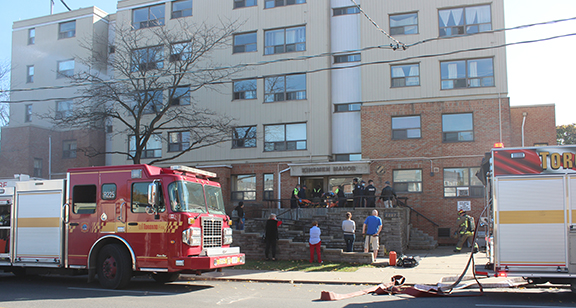 Toronto firefighters were called to an apartment fire at Kinsmen Manor on Gerrard Street East between Wayland and Malvern avenues just before 2 p.m. on Oct. 23. Photo by Alan Shackleton.

One person has been taken to hospital with serious injuries after a fire in an apartment building on Gerrard Street East.

Toronto firefighters were called to Kinsmen Manor, 2287 Gerrard St. E., between Malvern and Wayland avenues, at 1:53 p.m. for reports of a fire in a third-floor apartment.

When they arrived they found the unit facing Gerrard Street on fire and a person injured inside.

The fire was quickly knocked down, and the injured person (believed to be a woman) was taken by stretcher to an ambulance and then to hospital.

The one-alarm fire drew numerous fire trucks to the scene, along with concerned residents.

Police have closed Gerrard Street East between Malvern and Wayland.