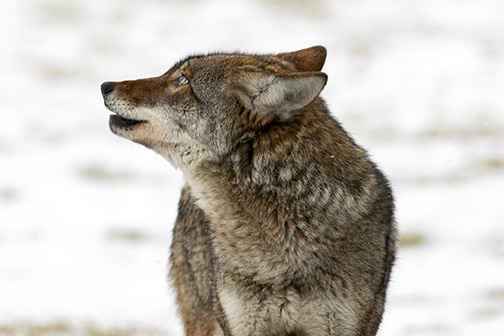 Columnist Ann Brokelman heard a coyote howling along to the sound of a fire truck. Inset photo shows owlet Henry and one of his parents. Photos by Ann Brokelman.

Do you ever go outside and stand on your porch, driveway, or balcony, in the dark, and just listen? The sounds of nature are all around us, though most of the time they are interrupted by cars, people walking, dogs barking, the neighbour’s music, or just the background hum of the city.

Do you remember the Northeast Blackout back in 2003? Most people remember what it was like to see so many stars in the GTA, but how many of you remember how quiet it was? Even with the power on, and the city humming, once in a while you can still hear a few amazing sounds that will make you realize that when you’re alone in the dark, nature never lets you be truly alone.

Lately I have been trying to listen more, and have caught a couple of great sounds that I wanted to share with you.

The other night my husband, Erle, while letting the dog in, heard a ‘hoo hoo hoot hoot’. After he paused to see if it would call again, he came in to let me know that he thought he heard an owl.

I, of course, ran outside into the dark, in the rain, barefoot and coatless,  with my phone in hand trying to record the sound if I was lucky enough to hear it. (This, despite what my family says, does not make me a crazy bird lady. I’m just an enthusiast.)

Sure enough, a few moments later I heard the sound. Amazingly though, it wasn’t just one owl calling, but two great horned owl adults and one juvenile. You’ll have to trust me that I can tell the difference between an adult and a juvenile and that I could tell the adult sounds were coming from different directions.

I wasn’t sure which way to go:  one adult was close to the house, one was further down the road, and in between was the screeching sound of the juvenile. I was never able to find them, nor could I get the recording, and I may have gotten thoroughly soaked, but I had an absolute blast trying to find them and enjoyed knowing they were hanging around.

My neighbours, Troy and Mel, had sent me a recording of a great horned owl barely a week before, and I’m glad they never got one of me running around the street that night.

This past year I was also very lucky when my son, Erik, called me to share his own discovery. He had been walking through the woods near his home when he heard some crows squawking like crazy up high in the trees. Someone, (can you guess who?), may have told him that the crows often do this when they are trying to harass and drive away birds of prey.

Sure enough, he followed the sound of the crows and found an adult Great Horned Owl, quickly followed by the sight of its angry-cotton ball looking baby. I went up the next day with camera in hand, met Erik in the woods, and we saw them, plus another adult owl. The adults and juvenile were perched high in the trees and were enjoying the afternoon sun. We stood there, as still as we could, but enjoyed when our slight movements would draw their yellow eyed focus. I was later able to share them with my granddaughters, Lara, Cara and Diana, when I met Erik there a few days later.

The owlet was promptly named Henry, and finding him became a regular outing for us all. It was lovely to watch Henry quickly grow, learn to climb up the trees using his talons, experimentally flap his wings, and begin to take short flights from branch to branch. It was also amazing to see how protective the parents were. If you could see an adult, you just had to figure out where it was looking, as it never took its eyes off Henry for long.

It wasn’t long before the trees were once again filled with leaves and we could not find them anymore, but it’s amazing to think  that if it wasn’t for the simple sound of some crows, my family and I never would have had this amazing experience.

One more story: a few nights ago I heard a coyote howling at a fire engine!  Yes, you heard me correctly. The fire engine was sounding somewhere in the distance, which naturally caught my ear, when suddenly I could hear a coyote responding to it. They actually have a very unique call.

Not sure if this is common to hear them responding to fire engine  I decided to ask Coyote Watch Canada. Lesley Sampson responded to me and said, “Over the years, I have had the joy of hearing entire coyote family vocalize in response to a train whistle. A lone coyote on numerous occasions answering to a fire siren. I wish I had more insight into their complex means, but it is their language understood between themselves. I do feel very blessed to a hear a coyote anytime.”

When I told this story to my son, he told me that one of the workers at the zoo said that their wolves also regularly howl at the GO Train’s whistles.

So turn off the TV, put down your phone, (or at least put it in your pocket), stop what you’re doing, go outside, and then send me a message telling me what nature sounds you can hear.

Enjoy the early morning birds singing to each other, the porcupines squealing for food, the racoons chittering and hissing at that stubborn green bin, the foxes with their chilling whines, the coyote howls, the owl hoots, and maybe even the light stomping of deer walking down the road looking for a snack. There’s so much more to nature than just looking at it, and I hope you enjoy it as much as I do.

For  You Tube video of the owl, go to https://youtu.be/IOjDtnDvqew

For You Tube video of the coyote and fire engine, go to https://youtu.be/pusZoGD3Pvg