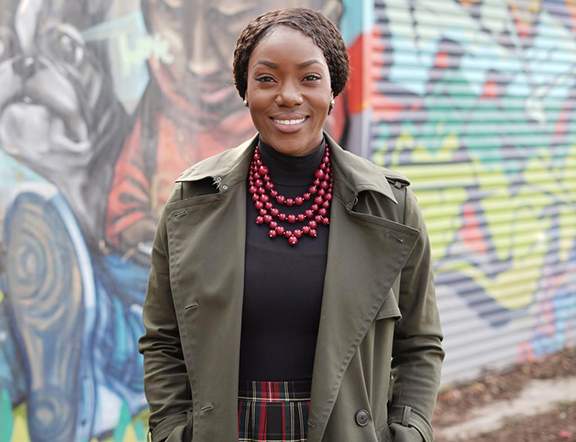 Veronica Stephen-Allen is seeking the nomination to be the Liberal candidate for Beaches-East York riding in the next provincial election. Photo; Submitted.

Veronica Stephen-Allen has announced she is seeking the nomination for the Ontario Liberal Party in the Beaches-East York riding.

Stephen-Allen has called the community home for many years, and has 13 years of work experience in the public service and municipal government sector.

Stephen-Allen, who ran for Toronto Council in the Beaches-East York riding in the 2018 municipal election, said she is seeking to be the riding candidate for the provincial Liberals for a number of reasons.

“There were a series of culminating events that led me to seek the nomination: Becoming aware of the gaps within the Police Services Act; the (Doug) Ford government’s handling of COVID-19 particularly as it relates to long-term care homes; and the inadequate plan to return children back to school safely,” she told Beach Metro News in an e-mail interview.

Stephen-Allen said municipal councils are limited in their power when it comes to dealing with such issues, and the best way to make change and impact policies is at the provincial government level.

As a Black woman, she said it is especially important that diverse voices are heard and concerns are addressed at Queen’s Park where real change can be made.

“My lived experience as a Black woman allows me to view issues and the impact of policies from a lens of intersectionality that factors many competing points of view,” she said.

“Because policies are only as good as they’re designed, it’s important to hear from voices that will be affected by it. Without a seat at decision-making tables, the perspective of the underrepresented is not considered, the outcome of which is poor policies.”

Stephen-Allen cited the Toronto police budget as an example of an area where change has to come from the province.

“Ultimately (Toronto) Council is not empowered to review TPS’s (Toronto Police Service) budget on a line-by-line basis, underlying the importance of having strong political leaders at Queen’s Park to instead deal with the issue through the Police Services Act,” she said.

Stephen-Allen said her public service experience, eight years of which has been in employee and labour relations, makes her a strong candidate for the provincial Liberal nomination in Beaches-East York.

“This experience equips me for several things, including negotiating complex contracts, formulation policy, and the ability to work collaboratively with opposition,” she said. “Given the need to occasionally find support across party lines and from other branches of government (as we’ve seen during the pandemic), this ability is of paramount importance for elected officials if they are to make progress on issues for their constituency.”

As a volunteer at a soup kitchen, Stephen-Allen said she has become very familiar with issues facing residents such as affordable housing, available and reliable transit, and food security.

“I’ve seen the challenges that come with living in a big city like Toronto. High costs of necessities like housing, transit, and food make the ability to get ahead/provide for oneself or family extremely challenging to large portions of the community.”

Stephen-Allen, a Millenial at age 37, said she offers for something different for voters both at the Liberal riding nomination level and when the provincial election comes around.

“Beaches-East York has not been a provincial stronghold for the Liberals in recent decades. Part of this I believe is due to presenting the residents of this community with the same choice wrapped in a different package,” she said.

“What I bring to the Liberals is youth, energy, diversity, fresh ideas and steadfast determination. Historically, the issues of importance to young people have not been advocated for, which has left a large segment of the electorate disaffected. As a younger nominee, I believe I am able to connect with and mobilize this group, as I understand many of the challenges faced by this demographic.”

( For more on McMahon’s bid, see our earlier story at https://www.beachmetro.com/2020/10/07/former-councillor-mary-margaret-mcmahon-seeks-nomination-as-ontario-liberal-party-candidate-in-beaches-york/

For more information on Huff’s bid, see our earlier story at https://www.beachmetro.com/2020/10/27/brandy-huff-joins-race-to-be-named-ontario-liberal-party-candidate-for-beaches-east-york/ )

Both Huff, in the story on her bid for the nomination, and Stephen-Allen recognize McMahon’s high profile in the community given the eight years she served on Toronto Council from 2010 to 2018.

“I would suggest not letting name recognition be the sole determinant for which a vote is cast,” said Stephen-Allen, pointing out that ideas, policies and understanding of the issues should be more important.

“As a Liberal candidate for Beaches-East York I intend on championing progressive ideas that support the growth of small business, continued investment in transit infrastructure, healthcare and education,” she said.

The Beaches-East York Provincial Liberal Association nomination meeting will be held virtually on Nov. 21. Candidates seeking the position have until Nov. 1 to sign up new members who would be eligible to vote at the meeting.

For information on how to join the Beaches-East York Provincial Liberal Association prior to Nov. 1 in order to be able to vote in the nomination meeting, please go to  https://ontarioliberal.ca/become-a-member/

For more information on Stephen-Allen’s bid for the nomination, please go to https://www.voteveronica.ca/