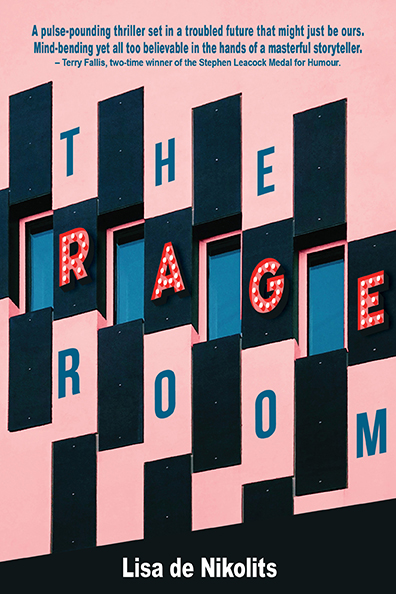 Local author Lisa de Nikolits’ life is as fascinating as one of her award-winning novels.

Her unique experiences at a young age helped shape the writer she is today.

“Shining a spotlight on the unsung female heroine is a recurrent theme in my writing and it comes largely from what I saw growing up in apartheid-era South Africa. The women bore so much; the women suffered so much then and they suffer still,” she said.

She continued to explain how this is illustrated in her latest novel, The Rage Room.  “That’s why the army that saves the world is called The MosaliTitans. Mosali means ‘woman’ in Sesotho and it’s my way of paying homage to the African women – and to all women.”

“I’ve always avoided labels which is why I don’t think of The Rage Room as only a science fiction novel. I think of it as an idea that became an obsession,” de Nikolits said.

The inspiration for The Rage Room came in the form of an off-hand remark made by one of her colleagues.

“A friend of a friend’s relationship had ended and to celebrate, a group of women were going to a rage room. I was rivetted and immediately obsessed by the name,” she said. Despite being enthralled by the concept of rage rooms, de Nikolits didn’t do a lot of research about them. She instead, in the true spirit of a renowned fiction author, opted to make the idea her own.

“I didn’t want to do much online research because I wanted to let my imagination run wild. My rage room that followed took a life of its own and spiralled its way into time travel, artificial intelligence, intrusive digital advertising, biohackers and mysterious world leaders, all of which become more real to me than my own world here in the Beach,” she said.

De Nikolits has been a published author for the past decade.

Through the years, she has learned to let go of things she does not need.  This recently came in the form of eight green garbage bags full of old writings that she decided to toss.

Realizing she didn’t need to keep every note, idea and draft filled her with a sense of pride. Looking back on her early years as a writer, she lamented not taking a different approach to her writing.

“If I’d set out earlier to learn my craft and not simply assume that I could write because I’d been told I had a good turn of phrase, maybe I wouldn’t have had all those bags,” she said.

The Rage Room is now available for purchase. Locally, it is being sold at Book City on Queen Street East in the Beach.

There are a few things de Nikolits would like to share about the book before readers who purchase it turn to page one.

“None of the scenarios described in The Rage Room are unrealistic. The book takes place in 2055 and I truly believe that the plastic world, the controlled weather, the bio-hackers and the demise of nature are all coming our way. Virtual reality is already taking over our lives – I’m not naming any names but I’m looking at you, Mark – and the accompanying erosion of our precarious social psychology is leaving us increasingly at the mercy of intrusive, targeted advertising. Oh, and that the novel is very funny.”

For more information about de Nikolits and The Rage Room, please visit www.lisawriter.com