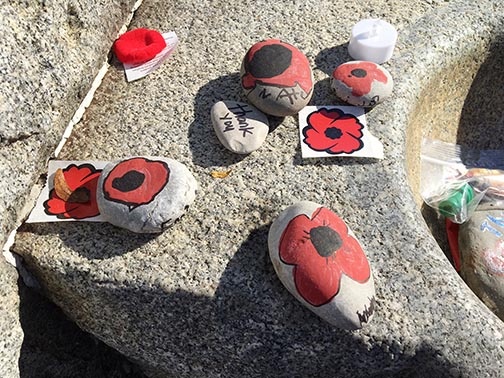 Stones painted with poppies and other tributes are show on the Kew Garden Cenotaph on Nov. 10. Photo by Alan Shackleton.

EDITOR’S NOTE: This poem about the impact of war was written by the late Alyce Rogers and submitted by her cousin Suzanne Berrie. We run it today in advance of Remembrance Day on Nov. 11.

When the young man went to war
he did it for a worthy cause,
believing he was fighting for
honour, truth, justice in laws.

Oh what a noble war!

He did not have the heart to tell,
when he wrote his little wife,
“It’s hard to liveing a dying hell,”
The war had changed his life.

Oh what a lonely war!

His war pals were a different breed
because they drank and swore.
He loved his pals; he did his deed,
and drank a little more.

Oh what a cruel war!

He saw his friends drop all around.
He thought his heart would burst,
and as he laid them in the ground,
it gave a man a thirst.
Oh what a gruesome war!

But luck was with him all the way.
He was on the winning side.
They shipped him home one brand new day,
full of hate, disgrace and pride.

Oh what a long, long war!

His children ran to greet their Dad
when he came through the door,
“Did you kill many who were bad when you were in the war?”

Oh what a one-sided war!

He could not tell them how he felt,
so went out on the street
to search out his wartime pals
who understood defeat.

Oh what a secret war!

And so they sat night after night
drink after drink consumed.
They’d won the war, each and every fight,
as cannons loudly boomed.
Oh what a memorable war!

He got up the nerve one Christmas eve
to tell his family the story.
He had a few drinks and took his leave
and ran home to sing of his glory.

Oh what a glorious war!

The streets slid by as he quickened his pace;
then he stumbled in the door,
but his son had a look of disgust on his face
and told him he was a bore.

Oh what a wasteful war!

Now he staggers the streets each and every night:
“No more do we have to roam.
Oh we won the great war boys, each and every fight,
and they’re waiting for us back at home.”

Oh what a wonderful war!