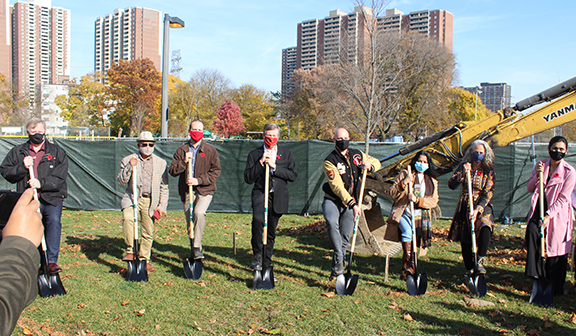 Mayor John Tory, centre, was joined by a number of local dignitaries during the ground-breaking ceremony for the International Mother Language Day monument in Dentonia Park on Nov. 7. Inset image shows an artist's conception of the monument in the southwest corner of the park. Photo by Alan Shackleton.

A number of dignitaries including Mayor John Tory were on hand for a ground-breaking ceremony last week to celebrate the start of work on the International Mother Language Day (IMLD) monument in Dentonia Park.

The ceremony took place on Saturday, Nov. 7, at the location of the monument which will be built between the footpath and Avonlea Boulevard in the park’s southwest corner.

The monument recognizes and honours Toronto’s diversity and the more than 180 languages and dialects spoken in the city.

It also specifically remembers the roots of International Mother Language Day, which takes place on Feb. 21 to commemorate the anniversary of five students who died and hundreds more who were injured during a protest to speak the Bengali language at the University of Dhaka in Bangladesh (then East Pakistan) on Feb. 21, 1952. Before gaining independence from Pakistan in 1971, Bengali-language rights were restricted in the state formerly known as East Pakistan.

In his remarks at the Nov. 7 ground breaking, Tory said that having to defend the right to speak one’s own language should have special meaning for Canadians given the history of Residential Schools and attempts to force Indigenous peoples to lose their traditional languages.

“This should be of importance to every person in this city and this country,” Tory said. “It’s a fundamental matter of human rights.” The IMLD monument is being paid for by funds collected by the committee in partnership with the City of Toronto.

“I’m proud the community and the city were able to take a leadership role and to make this a reality in a City of Toronto park,” added Tory.

Membersof the committee, other dignitaries who spoke and Tory also praised the work of former Beaches-East York Councillor Janet Davis in starting the process for the monument and being a champion for it at city council.

“Thanks to Councillor Bradford and his team, and a special thank you to Councillor Janet Davis for her support to be able to complete this dream,” said Azad.

The IMLD monument is expected to be completed by February of 2021.