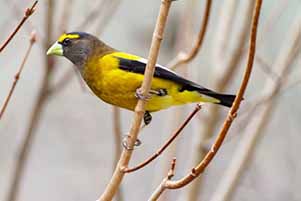 I don’t usually write stories about the times I saw yet another robin hunting for a worm, or a duck with its rump sticking out of the water, or when there’s a hawk perched in one of my trees.

I’d love to, as I love all these moments, but the stories I decide to share are the ones that I hope would stand out to you. I do hope you believe me when I tell you that, even after years and years of birding, I still smile at the chickadees hopping around my feeders.

For the first time in my 41 years living by the Scarborough Bluffs, I came across a tree absolutely full of Evening Grosbeaks (Coccothraustes vespertinus) in my front yard.

Now, I’ve seen them up in Algonquin before, a lot over the past number of years actually, but almost never in Scarborough.

In fact, one of the main reasons for me to head north every winter has been to get some better pictures of the Grosbeaks.

I couldn’t believe that all I had to do was to just look outside my window to see them. Naturally, I ran outside with my camera to capture them in all their beauty. They were sitting high in my tree eating from the branches. In the tree with them were some Cedar Waxwings and House Finches. They are all stunning birds and some of my favourites.

I was researching the Grosbeaks later, and found out that, according to Finch Research Network, there had been an Irruption Alert because the largest number of Evening Grosbeaks were reported to be on the move in 20 years.

According to an article by Tyler Hoar and Matthew Young, these birds are being seen all across Ontario and as far south as West Virginia and Florida!

To my knowledge, they don’t know exactly why this is happening, on this scale, this year. There’s so much we still don’t know about our wildlife.

So what are some cool facts about the Evening Grosbeak? They may not be our most colourful bird, but their yellow really makes them stand out.

The male has a yellow body, a dusky head with a massive bill (for a bird that size), and distinct yellow eyebrow stripes-just stunning. The females are similar in size, but only have golden highlights in their soft gray plumage and don’t have the golden eyebrows. Their powerful bills can crush most seeds, though sunflower seeds may be their favourites.

According to Hinterland Who’s Who, a single grosbeak has been seen eating 96 sunflower seeds in just five minutes! In the summer they also eat insects and tiny caterpillars.

Evening Grosbeak is a songbird with a song! What does that mean? It doesn’t have complex sounds to attract a mate or defend its territory, but rather one main simple call, including sweet, piercing notes and chirps, that they repeat over and over. You might actually confuse their song with that of a robin’s, though I think it sounds a bit nicer.

So, keep your eyes on the trees and your bird feeders for this incredible songbird. They are in the area, for now, and are really amazing.

Please let me know if you see some.

They are on the list of “special concern” species in Ontario. That doesn’t mean they are endangered, but that they may quickly become threatened or endangered if we don’t stay vigilant to keep them safe.