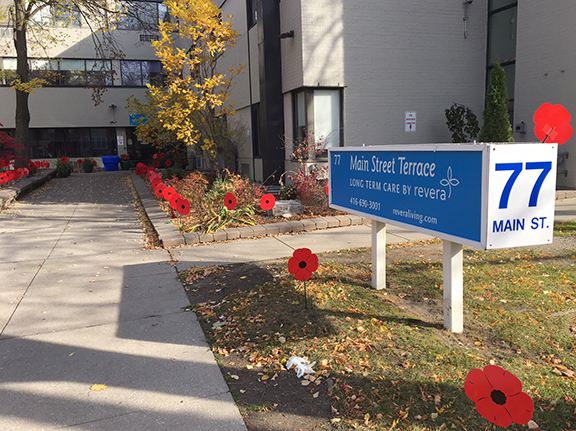 The exterior of the Main Street Terrace long-term care home decorated in advance of Remembrance Day. Photo by Alan Shackleton.

The number of active cases of COVID-19 is slowly dropping at long-term care homes in East Toronto.

Main Street Terrace on 77 Main St. reported an outbreak in mid-October when it got its first positive case of the second wave this fall. The number of cases had reached a peak of 65 by Nov. 2.  The facility was reporting 35 cases among residents, seven deaths and 10 cases among staff members on Nov. 19.

The long-term care home received assistance from Toronto Public Health, Michael Garron Hospital, and Revera Inc. (the owner), as residents and staff were regularly tested and treated, with several protocols set in place to curb the spread.

Other nearby long-term care homes in Beach Metro News’ coverage area have also shown a decrease in cases or never spiked significantly because of public health protocols that were observed.

The provincial data records “less than 5” as a measurement of any numbers below five.

While the numbers are coming down it is still an alarming situation, Ontario Health Coalition (OHC) and the Registered Nurses’ Association of Ontario (RNAO) have said in many instances after the second wave struck long-term care homes in the province.

Between Sept. 18 and Oct. 28, OHC tracked 97 active outbreaks in long-term care homes in the province. Other outbreaks in hospitals and retirement homes were also tracked.

“Since the beginning of the pandemic we have found that the total number of people infected by COVID-19 in health and congregate care settings including staff and patients/residents is 13,813 as of Oct. 28, having increased by 1,804 people or 13.1 per cent in six weeks,” a statement by OHC read.

On Nov. 13, provincial health minister Christine Elliot said the province was making “significant investments” to fund the long-term care needs in the face of the second wave. The week she made the announcement, Ontario had 71 deaths from COVID-19 in long-term care homes.

Just a couple days after, RNAO CEO Doris Grinspun called on the province to lockdown hard hit regions after seven deaths were reported in a long-term care home in Scarborough.