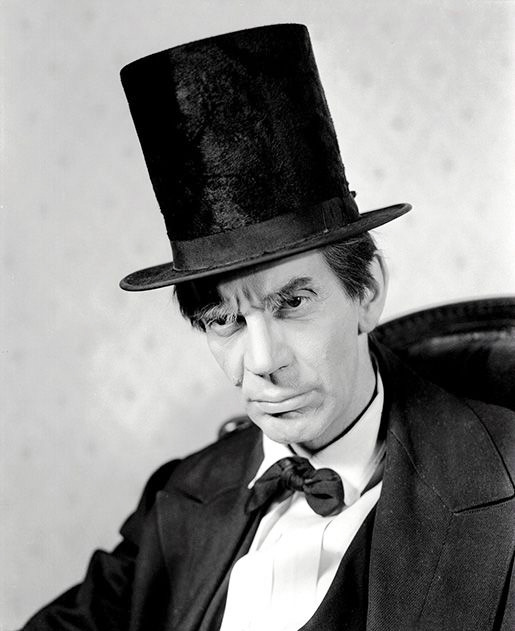 “Look, here’s the deal.” When Jim Carrey does his impression of Joe Biden on Saturday Night Live, that’s only the latest in a long line of Canucks playing American politicians.

Canada is “sleeping with an elephant” and we’re worried about election results though it isn’t even our country.

Raymond Massey (1896-1983) became famous portraying Abraham Lincoln on stage and screen. He received an Oscar nomination for his lead role in Abe Lincoln in Illinois (1940) and later played Abe in How the West Was Won (1962).

The lanky actor belonged to one of Toronto’s most prominent families. In his childhood Massey spent idyllic summers beside the wooded hills and trout ponds of Dentonia Park Farm, north of Danforth Avenue. If you’ve ever walked along Taylor-Massey Creek or played at Dentonia Park Golf Course, you have been on the sprawling Massey Estate that Walter Massey (1864-1901) named after his wife Susan (nee Denton) Massey (1861-1938). You can still find the beautiful Massey-Goulding home (circa 1921) on Dawes Road.

In 1897, Walter Massey created his model dairy farm on “the northeastern outskirts of Toronto” (Globe, 1899) to provide safe milk to the city, but died at Dentonia of typhoid after drinking contaminated water on a train.

His son, Denton (1900-1984), served as a Royal Canadian Air Force Group Captain in the Second World War as well as the Member of Parliament for Greenwood from 1935 until 1949.

Politics and showbiz make strange bedfellows, but Denton’s son Walter Edward Hart Massey (1928-2014) became an actor and played two American Presidents, Teddy Roosevelt in Cook and Perry: The Race to the Pole (1983) and William R. Taft in The Greatest Game Ever Played (2005).

After Massey Hall opened in 1894, the social elites of Toronto sponsored a young opera singer, Margaret Huston, the daughter of a carpenter. She became a renowned soprano and performed many concerts at our iconic music hall.

Margaret encouraged her 16-year-old kid brother, Walter, to make his stage debut at Massey Hall. Walter Huston (1883-1950) went on to fame as the patriarch of a Hollywood dynasty of three generations of Oscar winners, Walter, John and Angelica.

Walter Huston would win an Academy Award and his director son John two Oscars for The Treasure of the Sierra Madre (1948). Walter also played Honest Abe in Abraham Lincoln (1930).

A President downplaying a deadly global pandemic and then getting sick himself? That would be Woodrow Wilson who almost died of influenza in 1919.

Alexander Knox (1907-1995) of Strathroy, Ontario won a Golden Globe for playing the lead role in Wilson (1944) which won five Oscars. At least Wilson didn’t advise drinking bleach or staring at a solar eclipse!

A politician branding someone a Communist as a dog-whistle tactic? The son of a Presbyterian minister, Knox was hardly a radical, but his Hollywood career was cut short by the Senator Joseph McCarthy witch-hunt of the 1950s. Knox moved to England while John Huston became an Irish citizen.

Other Toronto-born actors have played American presidents, including Edward Earle (1882-1972) as James Polk, Stan Jones (1926- 1998) as Ulysses S. Grant and Christopher Plummer as Franklin D. Roosevelt who won in a landslide in 1932 after Herbert Hoover failed to take responsibility for the economy during the Depression.

In a crisis there is a yearning for leadership. When we don’t learn from history, we are doomed to repeat it.

The Hustons gave us “the stuff that dreams are made of” in great films like The Maltese Falcon (1941). The Masseys left a legacy in Toronto with Hart House, Massey College, Fred Victor Mission, Massey Hall and Dentonia.

One family came from humble beginnings, the other was rich and powerful.

History is all around us. Just look and imagine the families that lived here once upon a time.