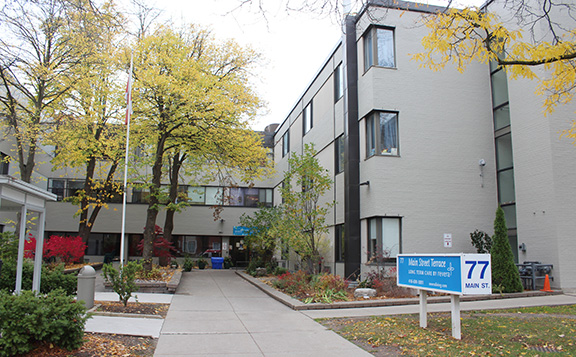 The Main Street Terrace long-term care home is reporting five active cases of COVID-19 among residents as of Dec. 4. Photo by Alan Shackleton.

Active cases of COVID-19 in a number of East Toronto’s long term care homes have gone down recently, but there have been almost a dozen deaths reported.

“Michael Garron Hospital (MGH) provides infection prevention and control (IPAC) advice and support to 10 long-term care (LTC) homes in East Toronto,” MGH spokesperson Lucy Lau said. “When there is a concern about an outbreak in one of our LTC homes, MGH will work collaboratively with the home, Toronto Public Health and occasionally ETHP (East Toronto Health Partners) partners.”

As of Friday, Dec. 4, as per reports from provincial data, the number of active cases were significantly reduced in the homes looked at by Beach Metro News, while three homes reported deaths. On Nov. 19, Beach Metro reported numbers for the LTCs in the area, just about two weeks ago. (https://www.beachmetro.com/2020/11/19/covid-19-cases-slowly-dropping-at-number-of-east-toronto-long-term-care-homes/ )

As of Dec. 4, Craiglee Nursing Home in Scarborough has 20 active cases, one more from two weeks ago and 12 deaths, up from eight two weeks ago. There are two additional staff cases, totalling 25 active staff cases. The home has 169 beds.

As of Dec. 4, Harmony Hills in the north end of East York has 12 active cases, down from 42 active cases reported two weeks ago and up to 10 deaths, from less than five two weeks ago. Staff cases have reduced from 19 to five. There are 160 beds in the home.

As of Dec. 4, Main Street Terrace in the Beach area has five active cases, down from a peak of 65 reported on Nov. 2, just a month ago. But since then there have been a total of eight deaths. The home of 150 beds is also reporting zero staff cases.

“The case numbers look to be stabilizing which is a relief,” Beaches-East York Councillor Brad Bradford said. “Of course with such a vulnerable population group friends and family won’t rest easy until the residents are COVID-free.”

“I’ve been told communication efforts have increased significantly with daily contact from the operators to help support loved ones during an extremely stressful and difficult time,” he added.