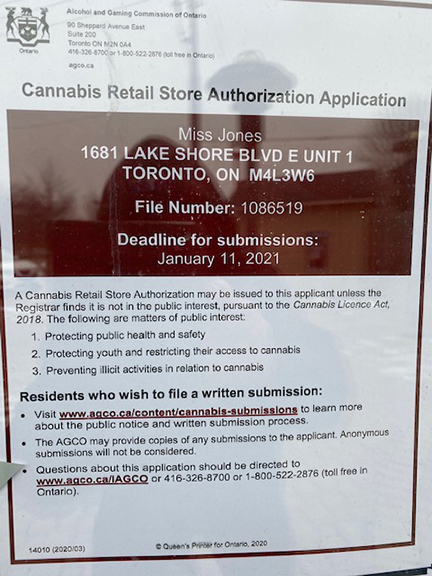 This notice of an application for a cannabis retail store at 1681 Lake Shore Blvd. E. in Woodbine Beach Park has appeared on the building. Photo by Nicholas Deitrich.

A proposal for a cannabis shop in a building that is located on City of Toronto property in Woodbine Beach Park has a local resident concerned.

Resident Nicholas Dietrich said that location is not appropriate for a cannabis shop.

“I personally feel it is not in the public interest,” he said in a note to Beach Metro News.

“The temptation to youth for additional illicit activities related to cannabis is not warranted in this very special location. I might also point out that this is publicly owned parkland under lease. There is an abundance of privately owned empty retail locations just a few blocks away on Queen Street.”

The site where the shop is proposed is part of a complex of buildings at 1681 Lake Shore Blvd. E. that houses a Tim Hortons, a fish and chips shop and a Booster Juice.

The application for the cannabis shop approval is posted on the west side of the building by the fish and chip shop, said Dietrich.

He added that it is important residents are aware of this since the deadline for commenting on it is Jan. 11.

The application by Miss Jones is for Unit 1 of the building.

The Cannabis Retail Store Authorization Application was posted by the Alcohol and Gaming Commission of Ontario (AGCO).

It reads in part:

“A Cannabis Retail Store Authorization may be issued to this applicant unless the Registrar finds it is not in the public interest, pursuant to the Cannabis Licence Act, 2018.”

The notice said matters of “public interest” are “protecting public health and safety”; “protecting youth and restricting their access to cannabis”; and “preventing illicit activities in relation to cannabis”.

Residents wishing to file a written submission regarding the application by Miss Jones (File Number 1086519) can go to www.agco.ca/cannabis-submissions for more info.

Anonymous submissions regarding applications will not be considered, the notice said.

Deitrich said in his opinion the application fails to meet the “public interest” criteria when it comes to protecting youth.

“Many families with young children frequent the Tim Hortons’ site and the parking lots in front of and to the east and west of the site,” he said.

“It is an area during the COVID era where people can walk and enjoy the outdoors in safety. It is important that public health and safety be maintained and that illicit activities be minimized. You are no doubt aware that illegal alcohol consumption, illegal bonfires and illegal fireworks occur frequently in this area. Does the site really need an additional cannabis store in this same area?”

This application will just add to the long list of controversy swirling around the 1681 Lake Shore Blvd. site.

The location is the subject of a long-term lease between the City of Toronto and Tuggs Incorporated (George Foulidis). In 2010, the city entered into the lease which will run until September of 2028.

Over the past decade, the lease has been criticized and at one point the city had entered into talks to buy it back. That has not happened given the cost and the fact the lease in now in the final half of its existence.

Beaches-East York Councillor Brad Bradford told Beach Metro News that the City of Toronto was notified by the AGCO on Dec. 29 of the cannabis retail shop application for the site.

“With the commenting deadline set for January 11th, there isn’t much time to respond to these applications,” he said. “City legal staff are still investigating whether a cannabis retailer would be permitted under the lease.”

Bradford said the location is a prominent one for the entire city. “It’s so important that we ensure that we bring in businesses that can animate the area and serve the needs of all the people who visit Woodbine Beach and the eastern beaches in general,” he said.

The technical details of the lease are still being looked into, and Bradford said he was not sure at this time how much influence the city has regarding what is permitted at the 1681 Lake Shore Blvd. E. site given that licenced cannabis retail stores are legal in the Province of Ontario.

“As most folks know, the city can’t regulate the location of cannabis stores beyond what’s in the provincial legislation,” he said.

A search of the applicant for the cannabis shop at the site reveals that Miss Jones is a company with a number of cannabis retail shops in Ontario. More info on Miss Jones can be found at https://missjonescannabis.com/