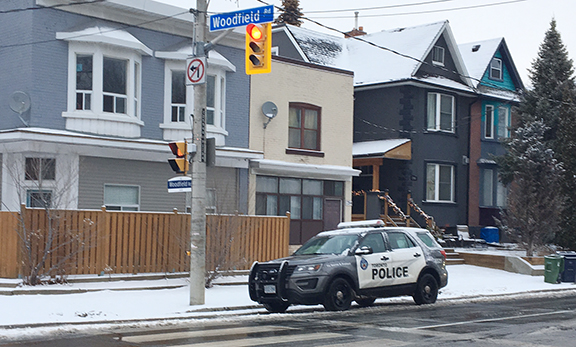 A 35-year-old woman has been charged with aggravated assault in connection with an alleged stabbing near Dundas Street East and Woodfield Road on the morning of Dec. 30, 2020. Photo by Alan Shackleton.

A 35-year-old woman is facing charges after a man was stabbed late last month.

Toronto police were called to the area of Dundas Street East and Woodfield Road at just after 5 a.m. on Wednesday, Dec. 30, 2020 in connection with the incident.

According to police, a man was allegedly stabbed in the abdomen by a woman who was known to him. He was taken to hospital with injuries that were not considered to be life threatening.

On Thursday, Jan. 7, 2021, police said Lindsay Greg, 35, turned herself in in connection with the incident.

She has been charged with aggravated assault and failing to comply with a release order.