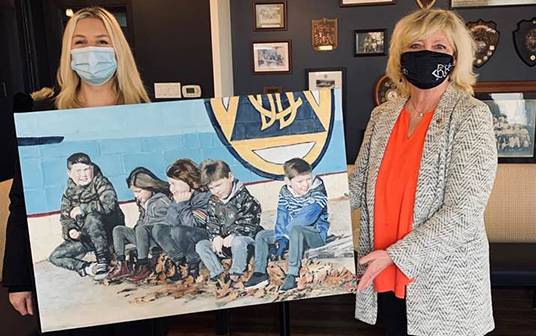 When Charlene Provan took the job as General Manager at the Balmy Beach Club (BBC) in 1998, her goal “was to make the club a welcoming place for everyone.”

At the foot of Beech Street, the Balmy Beach Club had accepted women as members since the 1970s.  However, women rarely walked through the big front doors. So, Charlene added wine and cocktails to the bar, brought in wine glasses (the club had none!), made changes to the menu and organized female-friendly events.

“The BBC is more than a club, it is an extended family,” said Charlene. “I wanted everyone to feel comfortable.”

The BBC first opened its doors in 1905.  After the last 22 years at the helm, a time when the club membership increased significantly, Charlene is now retired, effective Jan. 1 of this year.

There probably isn’t a member that has not shared a milestone moment with Charlene – from a family wedding to a big sports win (or loss!) to a good friend’s funeral.

“Lots of people have cried on my shoulder,” she said.

Charlene was a member in the mid-1990s.  She was on the squash section executive – one of the many sports at the club including lawn bowling, rugby, volleyball, paddling and hockey.

Charlene was working down the street at the popular Lido’s Bar on Queen Street East when she applied for the General Manager job. She got the gig and never looked back.

She opened the doors of the Balmy Beach Club for events such as the Beaches Jazz Festival, Spring Sprint in support of the Beaches Recreation Centre, Blues Fest and many community events and meetings for non-profits such as the Rotary Club and 100 Women Who Care Toronto East.

One major milestone event stands out in Charlene’s memory:

“It was an honour to organize the Club’s 100th Anniversary in 2005 – a busy three days of events that included a feature on CITY-TV, a Blue and Gold Ball, a church service on the beach and, the unveiling of the first BBC beach-side mural.”

“My only regret is the barge full of fireworks left floating at Ashbridges Bay – we could not set them off because of an electrical storm!”

In 2007, Charlene was a YWCA Women of Distinction award winner.

Charlene met her husband “Fuzz” (aka Paul) at the club and on Jan. 28 it will be 14 years since their first date.  His rule was they limit the “Balmy-talk” to 30 minutes a day!

During her tenure, Charlene served five Boards of Directors, including working with the current President, JP Cormier.

“Charlene was not only a leader but she was a friend to every member – she leaves a legacy of commitment, dedication and love for the Balmy Beach community,” said Cormier.

Charlene has been granted lifetime membership status, in recognition of her service.

Charlene dotes on her grandchildren and to commemorate her retirement, the Board commissioned talented club member Jennifer Crawley to paint a picture of the grandchildren in front of the Balmy Beach mural.  A photo by well-known Beach photographer Michelle Quance, inspired the artwork.

Cormier presented the artwork to Charlene on behalf of all members at a small ceremony on Dec. 21.

“What I will miss most is the lifelong friendships I’ve made,” said Charlene.

Lisa Lamb is the new incoming BBC General Manager and has been working with Charlene’s support since the fall.