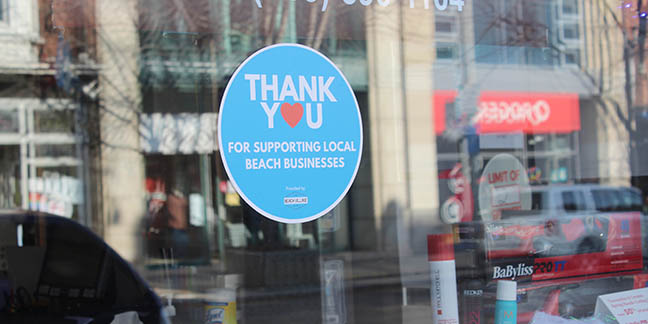 A sign from the Beach Village Village BIA thanks residents for shopping local. Photo by Alan Shackleton

In a letter to the premier, writing on behalf of the city’s 84 BIAs representing more than 70,000 businesses, the two state that the latest emergency orders, while important for reducing the spread of COVID-19, are harmful to small businesses.

“Under the latest orders essential retailers – particularly big box stores – are able to sell non-essential items in-store, and after-hours,” the letter reads. “This puts small businesses at a disadvantage and is a public health concern as it may encourage non-essential travel.”

Bradford has been on weekly calls with TABIA throughout the pandemic and says there have been a lot of grievances over emergency rules for big box stores compared to small businesses.
In the letter, Bradford and John Kiru (Executive Director of TABIA) make their request.

“We are asking you take urgent action by going one step further in the orders and mandating big box stores and other retailers selling essential goods to close off sections of their stores where non-essential items are displayed,” they said.

They cite a similar strategy used in Manitoba. In that province’s second retail lockdown in November 2020, it chose to not allow big box stores to choose their hours of operation.

The goal is fairness for small businesses, Broadview-Danforth BIA chair Albert Stortchak said, expressing what so many BIAs across Toronto are feeling.

“You see the big box stores, they’re selling the same products as we are and that hurts,” he said.

While explaining that small businesses have demonstrated their capability to follow COVID-19 health protocols, Stortchak goes said if small businesses are outcompeted by big box retail under the current disadvantage, it spells problems for the future of community main streets.

Some vacancies have made room for other businesses to grow, such as Mary Brown’s Chicken which opened in GreekTown on the Danforth last year, but Stortchak said the risk is greatest for small, independent shops.
He said it is those type of small, independent stores and their owners that make a community vibrant as compared to franchises or generic shops which are found in most neighbourhoods.

“It’s going to hollow us out,” he said. “If we lose the small independents, you’re going to be going somewhere else.”

The letter to Premier Ford asks to “even the playing field” and review the new public health measures to curb non-essential travel and allow for equal competition for all business operators.