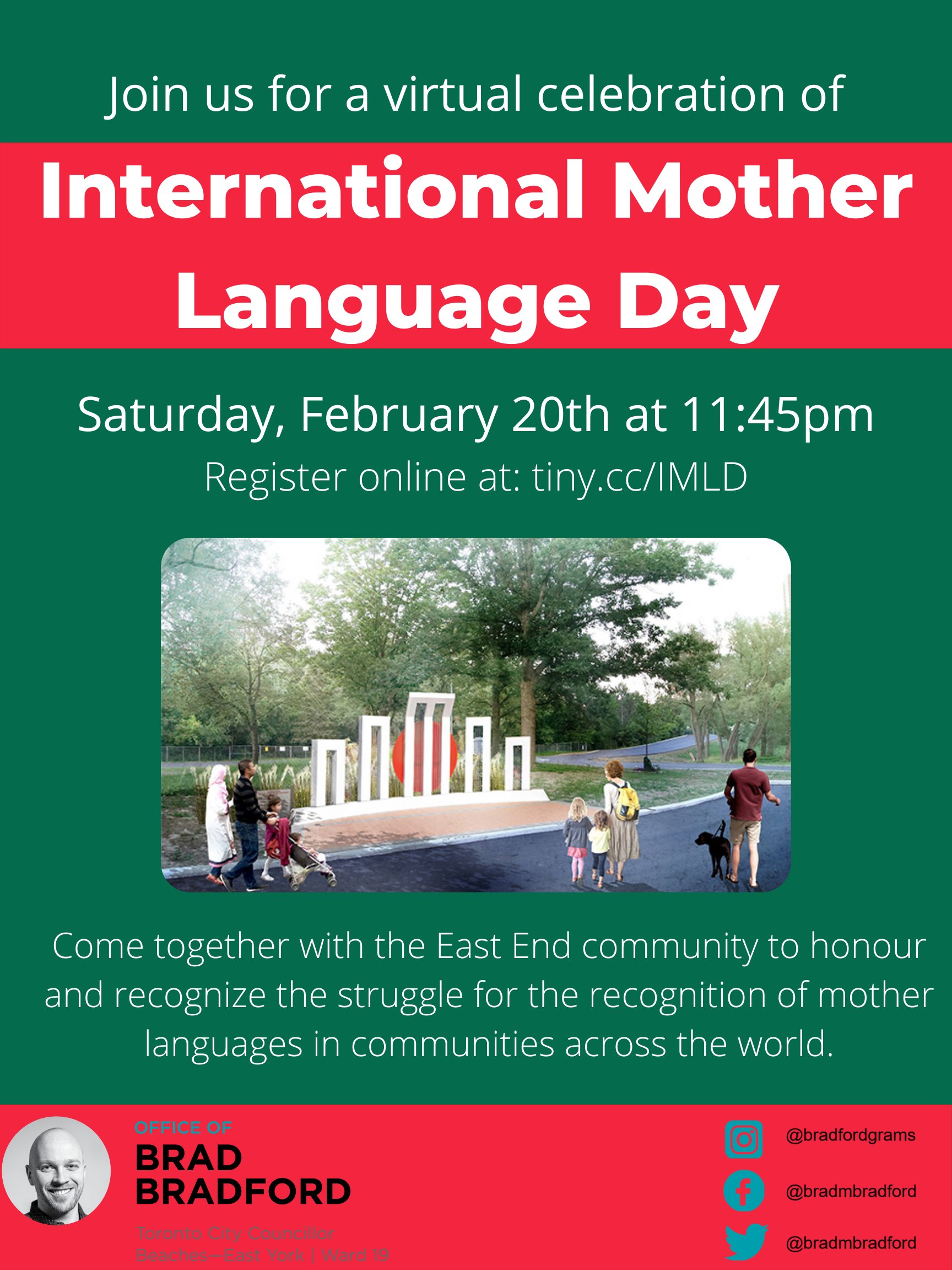 A virtual International Mother Language Day ceremony for East Toronto residents is slated to begin late on the night of Saturday, Feb. 20.

An online event is planned to start on Saturday, Feb. 20 and carry through to Feb. 21 with a midnight observance of IMLD.

Organized with help from the office of Beaches-East York Councillor Brad Bradford, the virtual ceremony starts at 11:45 p.m. on Feb. 20.

Those wishing to participate can log on to the event by going to https://us02web.zoom.us/meeting/register/tZUscO-gqzgvGdxWaghWlnCc10X7uAt5crrn

IMLD takes place on Feb. 21 to commemorate the anniversary of five students who died and hundreds more who were injured during a protest to speak the Bengali language at the University of Dhaka in Bangladesh (then East Pakistan) on Feb. 21, 1952. Before gaining independence from Pakistan in 1971, Bengali-language rights were restricted in the state formerly known as East Pakistan.

The day is especially important to East Toronto’s large Bengali community. It had originally been hoped a ceremony could be held at the site of the IMLD monument being built in Dentonia Park but that cannot happen due to COVID-19 safety regulations.

In past years, many members of the community would gather in the Danforth Village area at midnight on Feb. 21 but that can’t happen in 2021 due to COVID-19.

Instead, the virtual ceremony will be open to everyone to participate in and will feature a number of Beaches-East York and Scarborough Southwest politicians.

Along with recognizing the Feb. 21, 1952 incident, IMLD has also grown to recognize the rights of people around the world who are struggling to keep the right to speak their traditional languages.

The IMLD monument in Dentonia Park is now near completion. Work on the project began in November of 2020 with a goal of having it finished by Feb. 21 of this year. However, COVID-19 restrictions mean it has yet to be officially opened.

More information on the Feb. 20 IMLD event can be found at Councillor Bradford’s website at https://www.bradbradford.ca/imld2021/