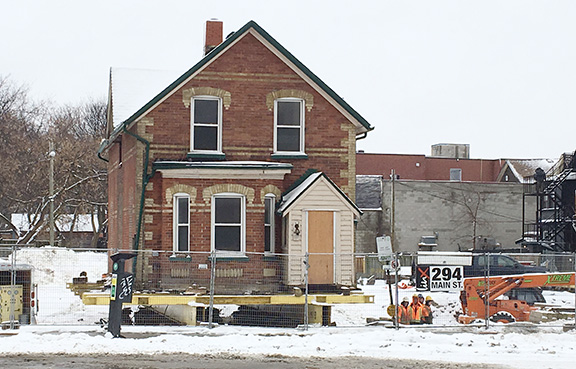 The heritage house at 292 Main St. just southwest of Danforth Avenue, is scheduled to be moved about 80 feet north on the morning of Feb. 23. Inset photos show the house's new foundation, and also how it is incorporated into the Linx condo development that will be build on the site.

The historic house on Main Street, just southwest of Danforth Avenue, is preparing for a move north this week.

The house at 292 Main St. is on the City of Toronto’s Heritage Property List and was built in 1887. It is being moved approximately 80 feet north and a few feet east of its present location in order to make room for the Linx condominium project.

The moving of the house is slated to begin sometime between 8 a.m. and 9 a.m. on Tuesday, Feb. 23, weather permitting.

The company moving the house is Laurie McCulloch Building Moving of Whitby, Ontario.

Greg McCulloch said that as with the moving of all buildings, care and caution is the key to success.

“Buildings are all the same, they were not designed to be moved,” he told Beach Metro News on Monday, Feb. 22.

“You have to treat them gently, and slowly slide them sideways.”

The house can already be seen to be supported by large steel girders, and it will moved on to a new concrete foundation.

“You support it with a new steel foundation to replace the old foundation, and it doesn’t even know it’s being moved,” said McCulloch.

The cost of the move of the house is being paid for by the developer. The house is incorporated into the design of the new condo. According the city’s Heritage Designation, the single two-storey detached house was built in 1887.

The house is a “rare example of an Ontario Cottage style dwelling in the area…The building’s design incorporates many High Victorian era embellishments,” said the city’s notice.

The house was originally the home of prominent East Toronto resident Donald George Stephenson, a lumber merchant and East Toronto’s first reeve from 1888 to 1894.